WHY PETER AND LOLA MAY NOT GET MARRIED NOW 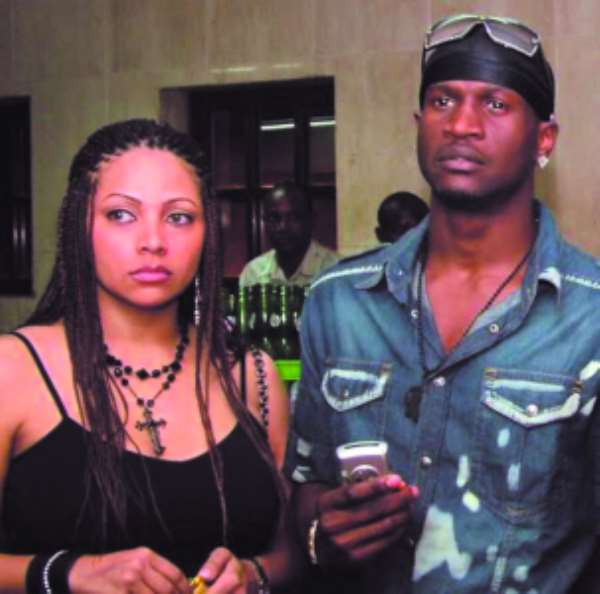 It's no longer news that one of the singing sensational duo, P Square, Peter isexpecting another baby from mother of his first son, Cameron, Lola Omotayo. A lotof public opinions, speculations and insinuations have it that, why on earthwould someone not be married to a woman and still expect to have another baby. Well,www.nollywoodgists.com canauthouritatively revealed that, there is more to this than meet the eyes.

While one group of tale mongers said that the debonair ex-public relationsexecutive has been unaccepted by the Okoye siblings, another has it that the domineeringattitude of this fair skin beauty is the cause of the delay in theirsolemnization.

“You will find Lola Omotayo 24 hours/ 7 days a week at P Square's Omole Estatevilla anytime you visit them. They live like husband and wife,” disclosed adependable source in the neighborhood.

“It is a sacrifice and a compromise both of them reached painstakingly in theinterest of their career and what they have both shared since childhood,”disclosed by a very close source.

How long Peter Okoye will wait for his brother, Paul is a question of time butthere are strong indications that he won't have to wait for too long. Paul whois the quiet of the two is said to be in love with a lady whose identity is yetto be revealed.

It will not be forgotten in a hurry that the identical brothers have doneeverything from cradle to their adult age together and have been inseparable.Aside attending the same Primary and Secondary schools, the two brotherspossess Diploma Certificates from the University of Jos (UNIJOS) and Degreesfrom University of Abuja (Uni-Abuja) respectively.

I GET FAVOURS HERE AND THERE, THE BIGGEST IS A MURANO JEEP FROM A FAN