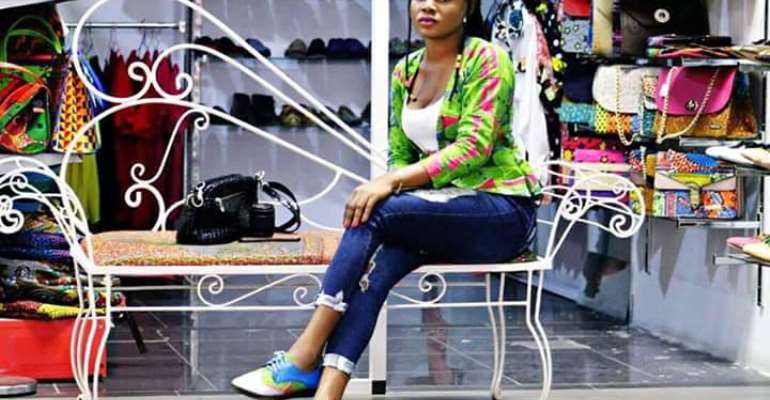 “It is a Man’s Man’s Man’s World,” by the late James Brown was a hit song in the 1990’s, but that is exactly where Sandra Ozwald wants to be. She wants to be in a man's world and even rule it.

However, living in a man’s world comes with its down downsides.

“I am a woman so when I’m giving instructions to the men I work with, they sometimes feel reluctant to obey.”

Sandra Ozwald (Sandra Kyeremaa), is carving a nitch for herself in the men’s shoe industry in Ghana. She is probably the only woman in Ghana who has ventured into the sector.

She started the shoe brand Saint Ozwald in Sunyani, the capital town of Brong-Ahafo Region, after she completed Senior High School and there wasn’t enough funds to support her university education.

Being a business minded person right from childhood, she got a business idea at a wedding she attended in 2013.

At the wedding, she couldn’t take her eyes of the groom’s shoe which was made from African print.

“I have always been interested in business from my childhood. I was selling ice cream, condensed toffee and groundnut cake to my classmates in school,” she said in an interview with modernghana.com.

She contacted the bride after the wedding and was introduced to the shoemaker who made the shoes for the groom.

“I never knew shoes could be made in Ghana. I spoke to my friend who was the bride at the wedding I attended and was introduced to the shoemaker. I gave him (Shoe maker) my capital of GH¢300. 00 and he started making some shoes for me to sell,” she averred.

Coming face to face with the reality of rejection on the first day of sales was a heavy blow, she admitted dispirited her.

“After I took my first consignment, I was nearly discouraged because the people in the first office I went to were not receptive. They told me sales in the office weren’t allowed,” she recollected.

“I was very sad and heartbroken,” she added

Four years after the incident, Saint Ozwald has improved the quality of shoes, employed 8 people and produces about 150 pair of shoes monthly.

The quality of shoes have led to celebrities like Stephen Appiah, Prince David Osei, Adjetey Annan, K.O.D and Pascal Amanfo endorsing the brand.

She readily admits that her co-founder, Kwadwo Yeboah has been instrumental to the success of the brand.

Yeboah’s work involves training shoemakers to be professional and putting strategic plans to improve and expand the business.

Choosing entrepreneurial path in an area perceived to be the preserve of men didn’t excite her mother that much.

“Mom wasn’t interested; she wanted a job that could earn me a monthly salary. She now can’t believe how things are working out”

Entrepreneurship comes with its challenges, and for Sandra Ozwald low market at Sunyani where her shoe factory is based is one.

She currently sells majority of the shoes in Accra and has a retail outlet at the Junction Mall.

Although, she is working to get enough machines to increase productivity, machines for making shoes are expensive.

For the future, “I dream to get the quality of my shoes to match with the Zara brand,” she noted.

Until then, Saint Ozwald is a bit far from successful.

Parts of Accra to experience dumsor today
58 minutes ago