10 Reasons Spanking Your Kids is a Bad Idea 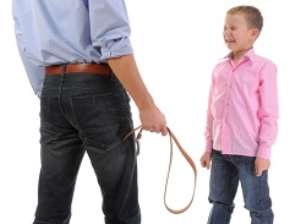 While spanking kids is still a practice adhered to by some North American parents, it's one that is met with its share of controversy and opposition. In fact, according to the Global Initiative to End Corporal Punishment of Children, 33 countries around the world have enacted laws that protect kids from being struck in any form or fashion by adult authority figures. Spanking is somewhat ingrained in the cultural fabric of many American families, but that doesn't make it any less damaging to kids or to parent-child relationships. Before you answer bad behavior with a swat to the behind, here are 10 of the things you should first consider.

Spanking Models Violent Behavior - Parents are careful about what they say in front of their children and how they react to certain situations and are conscious of how much of an influence they have over their kids' behavior. Spanking your child is also modeling a specific type of behavior, though, too. When you spank your child, you're effectively modeling violent and aggressive behavior.

Reinforcing Ideas About Strength and Weakness - To a child being spanked by an adult, the only lesson to be learned is that it's okay for bigger, stronger people to exert force in order to bend smaller, weaker ones to their will. Later, these same concepts can come into play in the form of bullying and cruel attitudes.

Sends Confusing Mixed Messages - Using spanking to teach kids a lesson sends them very confusing mixed messages, especially if you're making an effort to teach them that it's never okay to hit or hurt someone.

Damaging Kids' Self-Esteem - When the person that is supposed to love and protect you is actively hurting you, it damages your self-esteem in a very real and lasting way. For a child who's being spanked by the parent who claims to love her, it's even more confusing and hurtful.

Fear is Not Conducive to Learning - Dr. Bruce Lipton's work on the subject of human development and the learning process shows that learning is biologically impossible in an environment of fear. When your child is afraid that you're going to hurt him for making mistakes, he's not able to learn the lessons you're trying to pass along or retain new information. Your child won't 'learn his lesson' from being spanked because his brain can't process your message when he's afraid.

Inadvertently Encourages Kids to Be Secretive and Dishonest - Kids who are afraid to be punished when they're caught in the act of misbehaving will take steps to conceal their mistakes, which leads to secretive behavior and lying in order to prevent physical harm. The threat of violence can often drive a wedge between parents and children at a fairly young age, establishing a pattern in which details are obscured or falsified by default.

The Potential for Escalation - How many times have you caught yourself shouting at your child or saying things that you don't mean because anger has caused your composure to disintegrate? All too often, the swat on a toddler's hand evolves into a few licks with a paddle or belt, establishing a pattern in which violence escalates and never resolves the core issue at hand.

Instills Fear, Not Respect - Too many parents believe that in order to have their kids' respect, they must inspire fear. In fact, the opposite tends to be true. A child who is afraid of you will go out of her way not to invoke your wrath when she's a child, but as a teenager, she's more likely to rebel against your authority and act out accordingly.

Breeding Anger and Resentment - It's just not easy to keep from resenting someone who hits you at the slightest provocation, a fact that especially holds true for young children whose brains and cognitive processes are not yet fully developed. Spanking is a great method of temporarily putting an end to bad behavior, but it's an even better tool for inspiring resentment, anger and distrust.

Parents are Hurt, Too - No good parent likes the feeling that comes with striking their child in anger. Doling out corporal punishment makes you feel bad, makes your child feel bad and ultimately offers little in the way of positive, lasting results.

Family & Parenting
Powered By Modern Ghana
Do Your Children Know Their Vagina Or Penis By Its Name?
Majority Of Young Adults Now Live With Parents Amid Pandemic
Moving Away
Early Marriage And Social Betterment
How Quitting Smoking Can Make Fathers The Real Heroes Of Their Children!
The Ninani Group Recognizes The Contributions Of Fathers With Gifts On Father's Day
Would Your Child Benefit From Home Tuition?
How To Save Your Husband From The Hands Of Side Chicks
ACMFL Organizes Webinar On Digital Parenting
COVID-19 Updates Live Dashboard
TOP STORIES

Ghana Would Be Cursed Should We Vote Against Akufo-Addo — La...
25 minutes ago