Rip The Roof Of Excuses!!! 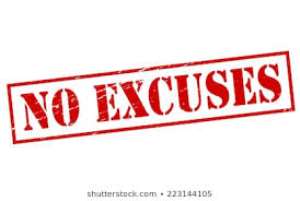 “4And when they could not come near Him because of the crowd, they uncovered the roof where He was. So when they had broken through, they let down the bed on which the paralytic was lying. 5When Jesus SAW their faith, He said to the paralytic, "Son, your sins are forgiven you."”

About six (6) years ago, I got myself an acoustic guitar. I love music and I thought it would be great if I could strum some chords myself and create some compositions, too. It was a difficult start. My fingers started hurting after a few rehearsals but I made some progress anyway.

The further I went, the more tedious the lessons became. They demanded a lot more time and attention than I imagined. Finally… the excuses set in— genuine excuses. I was genuinely getting busier. I was occupied with a lot more important schedules— genuinely.

Guess what. Six years on, I still consider myself a beginner when it comes to guitar because of my ‘genuine’ excuses. Within the same period, another who eschewed those excuses has become a professional.

Standing between us and the people we long to be like are excuses— genuine excuses. Our excuses may be sound but they are the reason we will always live a substandard life. We may never get to live life to the maximum because of these excuses we have molded for ourselves.

There is a genuine reason why you can’t start that business. However, take note that all other people who were able to start a business had similar or worse circumstances that could pass for a genuine excuse, too. They, however, saw beyond those excuses.

The Bible makes an interesting narration of four people who had a paralytic friend. Bringing him to Jesus for healing, they noticed the room was filled to capacity. There was no way they could reach him. That was a genuine reason enough for them to return home. However, they didn’t give in to such an excuse. They climbed the house and ripped the roof. Such craziness!!!

We all need a dose of craziness to see beyond excuses even when they are staring glaringly at us. Every winner is a crazy man/woman who chose to look beyond the challenges around them.

The scriptures were quick to add that Jesus SAW their faith and healed their friend. It didn’t make sense that anybody would go an extra mile to get a friend healed despite all the genuine excuses that stared them in the face. If that was not visible faith, then it was nothing else.

We all have roofs of excuses in our lives we need to rip apart. But for our excuses, some of us may have outdone those we so badly admire. If some of us had taken the pain to go that extra mile no one wants to go, we may have been at par with those we perceive as stars. There is a star in everyone. What dims its brightness is an excuse— a thousand reasons why something can’t be done.

There is always a genuine excuse to abort a dream but there is equally a genuine reason why it can be done. ‘Impossible’ is a word anyone who wants to get something done in this life should kick out of their language. Everything is doable. Just because it hasn’t been done yet by anybody doesn’t mean it can’t be done by someone.

Impossible only means it hasn’t been done yet, not that it can’t be done. Before man travelled to the moon, everyone discarded the idea of travelling there as a mere fantasy because it looked impossible. Before phones came, people assumed it would take the greatest level of wizardry to talk to others without seeing them. However, when all these became possible, we got to understand how impossible could turn into possible within a short period of time.

Impossible is always relative. When people say something is impossible, it simply means it hasn’t yet been done and not that it can’t be done. Never limit yourself with such excuses. Whatever you want, go out there and get it. Rip the roof of excuses and go for what you desire. If you fail, learn and get back at it until you get such done.

Whatever your dreams are, they are possible. They are achievable. Gird your loins and don’t stop pushing. Take ‘impossible’ out of your dictionary. Every challenge staring you in the face can be overcome. All one needs is the will to do so.

Where are you headed to? Are there roadblocks? Are there challenges? Well, everyone faced same. You have two options. You either give in to the excuses running helter-skelter on your mind and stay where you are or… you rip apart anything that stands in your way and get to your destination.

Now, I am genuinely going back to my guitar lessons. No excuses!