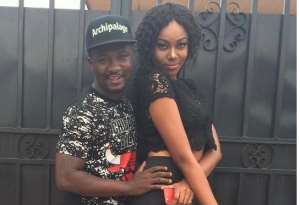 According to Achipalago, his love for the actress is more than his appetite for food.

He added that he will forever be satisfied if he ever get her as his woman.

The controversial entertainer has disclosed that among all female celebrities in Ghana, his most desired one is the “Princess Tyra” lead actress.

Speaking on Accra-based Kingdom FM with Fiifi Pratt, Palago Mufasa said the only thing holding him back from convincing the actress about marriage is that he is yet to see her in his dreams.

Meanwhile, Yvonne Nelson, in a tweet on Tuesday, January 24, revealed that she is not ready to tie the knot with anyone soon, despite pressure on her.

She explained that she doesn’t have the heart to condone the kind of attitude married woman has been tolerating in their marriage.