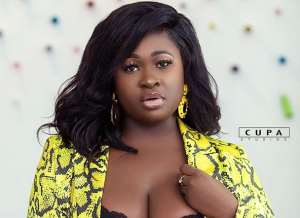 Fransisca Gawugah, better known as Sista Afia, a songwriter and musician, has commented on the rumours that she is Dbee (a person born into a wealthy family).

Even though she comes from a wealthy family, the musician claims that she suffered before becoming the well-known figure she is now.

According to her, she used to sell 'bofrot' (originally known as deep-fried bun loaves) and even sachet water on the street.

She revealed in an interview on Accra-based Hitz FM that she was sent to the United Kingdom (UK) because of her stubbornness.

“I am not a spoiled child. I have always worked for myself. I sold ‘bofrot’ and water during childhood. I was stubborn so I was flown to the U.K,” she said.

She continued that “I used to live in the ghetto. At age 8, I used to pluck mangoes from the tree in our house and sell them.”