Majid Michel cools off with Chris Attoh after 6years 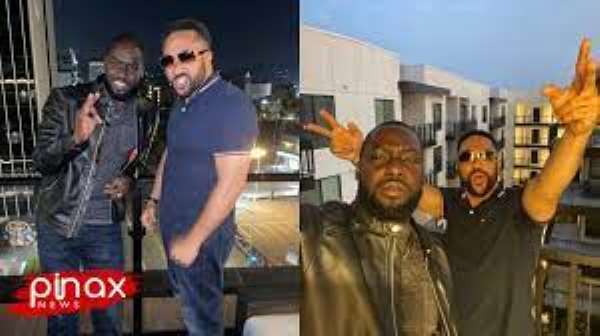 Ghanaian actors Majid Michel and Chris Attoh couldn’t hide their joy when they met each other for the first time in six years.

The two actors who have worked together on the set for years had to split at some point due to Chris’ schedule after he relocated to the United States.

But they have finally seen each other and the smile on their faces in new photos and a video speaks volumes.

Majid Michael shared a photo gallery on his Instagram page and said Chris is the best and that he loves him.

He also used the opportunity to slam the military men who killed two protesters at Ejura, Ashanti Region, this week.

“Haven’t seen my brother in over 6yrs!!! Thank you so much @chrisattoh it was a blaaaaaast!!!!! You’re the best! I love you my brother! … And to the cowards who opened fire in Ejura! That first look is for you. This is only proof that it’s better to raise strong children than to repair broken men,” he captioned the photo.

This is the first time Majid is commenting on the Ejura shooting. Many Ghanaian celebrities have reacted to the incident.

Prince David Osei, who played a vital role in the re-election of President Akufo-Addo, slammed the government on Twitter saying the military men’s actions are undermining the peace Ghanaians are enjoying.

Actress Yvonne Nelson said nobody should die for protesting for a better Ghana, adding that the President will be remembered for the things happening under his watch.

Actress Lydia Forson said she is struggling to accept that all of this is happening under a President who’s supposed to be a champion of human rights, freedom of speech and rule of law.

Rapper Sarkodie said in a tweet that this is ‘not the Ghana we preach to the world.’

However, Shatta Wale has been tweeting opposing views and defending the government. In his latest Twitter rant which kicked off Tuesday night, he blamed the youth for the problems facing Ghana.