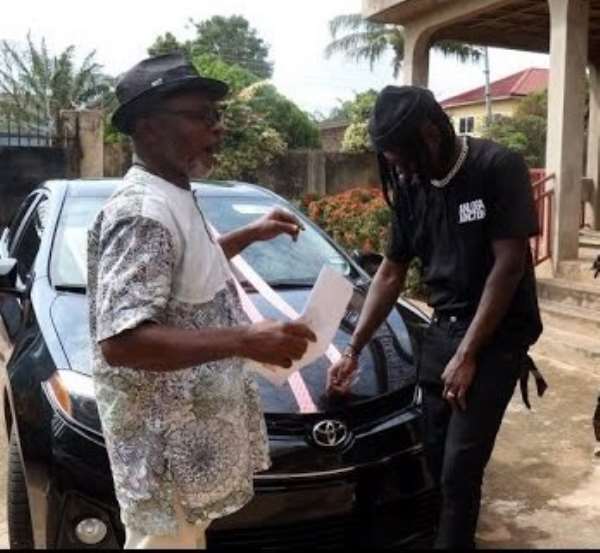 Stonebwoy has, in an act of generosity, donated a brand new 2018 model Toyota Corolla to veteran music producer Nana Asa Mensah, known popularly in the music scene as Agiecoat, through his charity organisation, The Livingstone Foundation.

The car was presented to the music producer in his house at a short ceremony which was graced by the management of Stonebwoy and some selected media personnel.

The vehicle was given out with its documents registered in the producer's name.

According to Stonebwoy, The Livingstone Foundation and Ayisha Modi recognised the difficulties encountered by the legendary producer when travelling to execute his business engagement; hence, thought it prudent and important to pool resources together to acquire the needed automobile to complement his efforts in making his works easy.

More to this, Stonebwoy has declared his unflinching commitment towards supporting the less privileged in the society.

Expressing his gratitude after being a beneficiary of The Livingstone Foundation and Ayisha Modi’s benevolence, Agiecoat lauded the dancehall artiste for being a saviour to him in these difficult times.

According to him, unlike other celebrities who neglect the legends in their times of need, Stonebwoy has set a pace worth emulating.