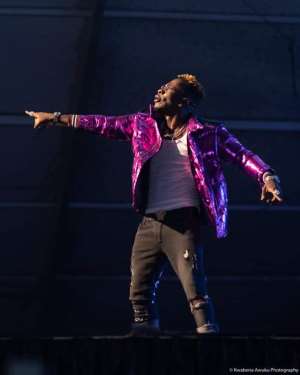 Controversial Dancehall Artiste Charles Nii Armah Mensah with stage name Shatta Wale has blasted some Ghanaian Bloggers who he claims are only interested in publishing negativity about him.

Shatta Wale said this in a live Facebook streaming monitored by attractivemustapha.com when he picked on some key musicians in the creative arts industry including the Hiplife ‘Grandpapa’ Reggie Rockstone and Sarkodie for not promoting peace and donating to support the needy in this Coronavirus times but allegedly encouraging petty fights on social media.

He mentioned that some people in the creative arts industry including musicians and bloggers deliberately thwart his recently held Faith Concert which was transmitted live on YouTube from his personal studio in his residence by introducing unnecessary hype to 'useless' activities online.

Shatta Wale fired hot words indicating that such Bloggers will suffer and God will punish them.

He bemoaned the fact that the things his colleagues did that attracted praise from some industry people, he rather received insults for doing same.