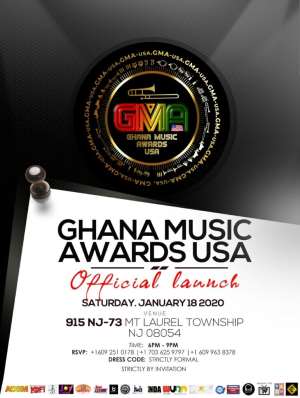 Organisers of the Ghana Music Awards USA have announced a change of venue for the official launch of the event amidst confusion over ownership of the event name.

The event which is slated for 18th January, 2020 was supposed to come off at the 2015 Bulington Mt Holly Road NJ 08060 USA but has now been changed to 915 MT LAUREL TOWNSHIP also in New Jersey.

Speaking to Dennis Boafo (Don D) who is the Executive Director of Don's Music Production, owners of the scheme, he told Attractivemustapha.com that they have legally registered the name so nothing will stop the event from happening.

He also added that, the date change was not influenced by the ownership confusion in anyway but the higher expectations surrounding the event has necessitated a search for a bigger auditorium.

The Executive Director of Don's Music Production, further revealed that they spoke to the man who popped up recently that he owns the name and the latter explained that the name is registered in his State as a Non-Profit Organization.

"During our conversation he asked us to change the name because he has duly registered with the federal government. On the contrary, our checks proved otherwise. We will therefore seek legal redress if he continues with his event with same name."

Museveni apologises over son's Twitter rant on Kenya
16 minutes ago

Paramount Chief of Bunkpurugu commends Bawumia for his good ...
25 minutes ago