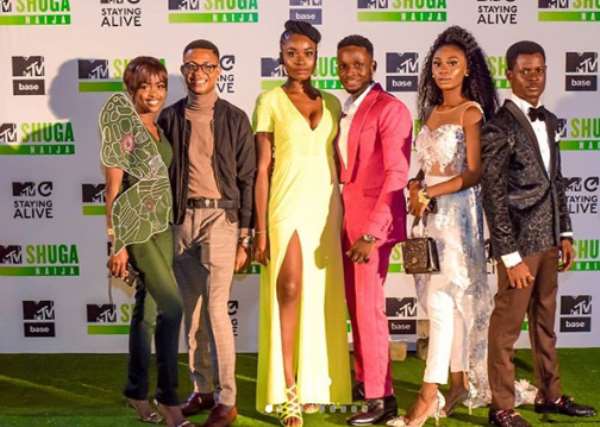 MTV Shuga Naija has been around since late 2013 and if there is anything the popular youth-focused franchise has figured out by now, it is how to give the people what they want - more.

Three seasons, increasingly deep messaging and growing eyeballs later, MTV Shuga Naija is back for a fourth season and by the look of things nothing has been compromised - not the storytelling, not the hardworking cast and certainly not the quality the critically acclaimed drama has been known for since its inception.

In season 4, we meet new characters and continue to follow the old on the journey we last saw them embarking on.

Ebisinde (Abayomi Alvin) is locked up in a police cell, with no hopes of getting out. A fate the audience will find inevitable after he was caught during a botched attempt at a spare parts robbery in the last season. Not only is Ebisinde locked up, his talented elder sister who has her own problems - raped yet being hounded by cameras while people question her credibility - has no money to bail her brother from behind bars.

There’s also Frances (Ruby Akubeze) whose tell-all presentation during a school performance has done nothing to relieve her of her pain. In an interesting but familiar twist of events, she is thrust into a panel filled with hawk-eyed parents who barrage her with unnecessary questions. Suddenly, their concerns disturbingly lie with the idea of a party on a school night as opposed to an innocent teenager violated at the said party. The victim suddenly becomes the criminal and these parents whose first instincts should be to protect, are more worried about the creases the situation may cast on their pristine reputation. A depiction that is an incredibly good illustration of the average Nigerian parent’s eerily familiar reaction to cases such as Frances’.

MTV Shuga Naija does not deviate this season. The show continues on its journey to focus on women in this climate. This season’s messaging toes the life of young women - a move that worked well for the last season. Yasmin (Rahama Sadau) and her husband's lovely marriage, is threatened by prying in-laws up north. Meanwhile, back in Molade memorial, Diana continues to hold sway as the resident Queen Bee while constantly waxing new devious ways to mess up everyone’s lives. Including hers.

This new season also ushers in fresh faces. There's Barbie (Omowunmi Dada) and Moji who really prefers to be called 'MJ' played by Belinda Yanga, two women who instantly grab attention when they pop on screen. And it has nothing to do with their colorful wigs or extravagant clothes.

The performances are good as usual. Since season 3, when the show particularly took it upon itself to bring more fresh faces to the screen, the show has taken a new turn to reinforce its stance in telling its truth.

Abayomi Alvin continues to be good as Ebisinde. A young boy who is nothing like his drunk father and who will go out of his way to do right by his sisters. His emotions suck you in and threaten to pull you apart on screen. There is also Ruby Akubeze whose Nollywood future promises to be bright especially if she insists on the right projects and scripts. Bukola Oladipupo continues to wow as Faa and one cannot wait to see how she plays her character when she eventually shares the screen with veteran, Richard Mofe Damijo. A notable mention is Timini Egbuson, who has played Tobi since the beginning of the show. Like his character, Egbuson’s acting has increasingly grown and by season 4, not only is the audience witnessing immense growth in his character arc, Timini’s growth as an actor is evident and applaudable. Newcomers, Omowunmi Dada and Belinda Yanga are also not afraid to play in these waters. They hold nothing back as they show off skills that reveal to the audience how good the casting decision to have them on screen is.

Perhaps what MTV Shuga Naija does best this season is to balance old faces with the new, while navigating the same waters of selling its story through fresh angles. It’s refreshing like the new theme song, welcome and most likely going to be a winner with their already established audience and new converts.