Of Stonebwoy's rants on bloggers; Attractive Mustapha has an advice for him 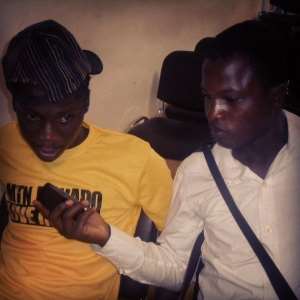 Stonebwoy over the weekend tweeted that Bloggers ask for money before publishing good News about artistes but charges nothing for "bad News".

In a reaction sighted on Social Media, Ghana's Celebrity Journalist Mustapha Nii Okai Inusah known as Attractive Mustapha expresses disappointment at Stonebwoy because he believes bloggers and the Media in general have been supportive towards the artiste's career.

Read Attractive Mustapha's comments below
I get worried anytime I read posts from celebrities who directly or indirectly paint negative perceptions about bloggers and entertainment journalists.

I just came across a tweet by Dancehall musician Stonebwoy which indicates that he just had a conversation with one blogger and the impression he gained is that personalities are expected to pay for publications on good News but bloggers and journalists will push Bad News for free.

“Just had a convo with one blogger. it’s interesting to know that if it’s positive News you have to pay but it’s bad News they’ll push it for free! And why didn’t you travel with a publicist!! Asem ooo…”.

I am aware Stonebwoy is one of the few musicians who give maximum respect to bloggers and journalists, but what might have pushed him to come up with this jargon, maybe he is expecting more from the media that he’s not getting.

Nevertheless, Stonebwoy is one artiste who has benefited enormously from Bloggers and Journalists, in fact, I can boldly say that I am one of the few who have supported this young man's career for over a decade without any monetary benefit and I know most of my colleague writers and bloggers have also done same without a penny.

One would have thought the musician will use the opportunity to congratulate bloggers for the role they have played in his career but as usual the latter decided to use his space to criticize the very people who have on their own accord willingly projected him positively to the limelight by his generalisation of his belief after talking to just one person.

Probably he might want us to accept that one bad nut spoils the soup but is that even the case?

Yes indeed Bloggers and entertainment Journalists are not running charity businesses even though they are voluntarily serving the nation. We don’t charge money purposely for positive News, but there are instances where we regard the particular News item as "promotional" therefore it is not wrong if the artiste or celeb pays for such publications.

Also, it's interesting that an artiste of high repute as Stonebwoy seems to be shocked about the query from the supposed blogger that he should have travelled with a publicist. Does it mean he is naive about the benefits of roaming with a publicist or a Media team?

No wonder he does not see the need to employ or pay for PR services.

At this point I think "our StoneGod" who we all believe aims higher honestly needs a lecture on the need to have an official PR outlet who would be at his beck and call.

And an honest advice to our celebs, if you want to go far, there must be a conscious effort to progressively be Media friendly, learn to "motivate" the Media not only monetarily, and also employ an active Public Relations Officer who has good rapport with the media.