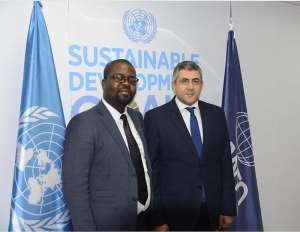 The Managing Editor and CEO of VoyagesAfriq Media Limited, Mr Kojo Bentum-Williams, has been appointed as the UN World Tourism Organization‘s Senior Expert for Communications in Africa.

This appointment will see him lead communications of the Organisation’s activities and events in Africa.

This new appointment took effect in March 2019 and part of his core mandates is to grow the UNWTO’s ten-point agenda in Africa under the Zurab Pololikashvili-led administration.

He is also expected to coordinate with the Africa Department at UNWTO to reach out to members of the African media and hold clinics to further train and inform travel media on the continent.

He previously worked as the press secretary to Ghana’s former ministry of Tourism Culture and Creative Arts until 2014 and also worked a press officer at the Ghana Tourism Authority.

He has covered a wide range of global travel and tourism conferences and he is seen by many as one of the authorities in the affairs of the UN Tourism Agency.

ATCNews wishes Kojo the very best in his new appointment, a strategic move by the powers that be in Madrid to deepen the UN agency’s engagement with the African continent and vastly improve and advance their agenda for and communications with Africa.