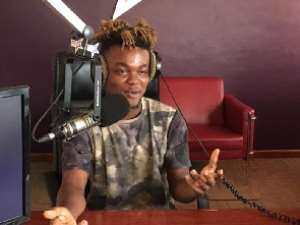 Fast-rising hip-life artiste Quamina MP has expressed his joy at his nominations in the upcoming Vodafone Ghana Music Awards (VGMA).

The singer bagged two nominations including the new artiste of the year and hiplife song of the year for his monster hit ‘Wiase y3 D3.’

Quamina said getting a nomination alone showed that his hard work was paying off.

Speaking to KOD and Cookie on The Zone on Starr 103.5 FM, he said, “the nomination alone is like a win for me.”

“It means a lot. It’s a very big deal. I never thought it will be this soon. I dreamt of being a big star, getting nominated, and winning an award,” he said.

When asked what his plans are for the future he noted that he wants to keep working hard and gets his songs on the global market.

Quamina detailing his days as an underground artiste stated that, “I still sleep in the studio. I’ve been sleeping in the studio for two years. Music started in Mankessim, after high school when I didn’t get the chance to be in the university, because of core mathematics.”

Quamina who wishes to be a president in the future, is currently promoting his new song featuring Medikal, titled “Amanfuor Girls.”