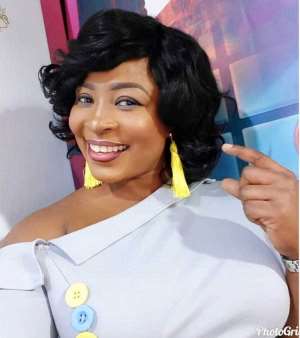 Versatile actress Gloria Osei Sarfo popularly known as 'Nana Ama' has passionately disclosed that it is not easy for women in the Creative Arts industry to rise.

Speaking to Attractivemustapha.com in a separate interview after a programme organized by the Ministry of Tourism, Culture and Creative Arts under the theme Digitization ,Monetization & marketing creatives online at the Accra Tourism Information Centre on 5th February, 2019, Gloria Osei Sarfo agreed with the sector Minister Hon Catherine Ablema Afeku who had earlier mentioned in her speech that most women lack the confidence to nurse their talents to the top because of factors such as general discrimination against women among others.

According to her, anytime a woman rises to the top it becomes something strange because it is not easy considering the gap between women and men in the industry.

The actress further encouraged women in the industry and those who might have some unique ideas or 'big dreams' with regards to entertainment and creativity in general to up their game and stop being reluctant to initiate a process of making it a reality for fear of failing.

Gloria Osei Sarfo is one of Ghana's favourite Television personalities and rose to become a household name after her amusing roles in the popular local TV series Efiewura.