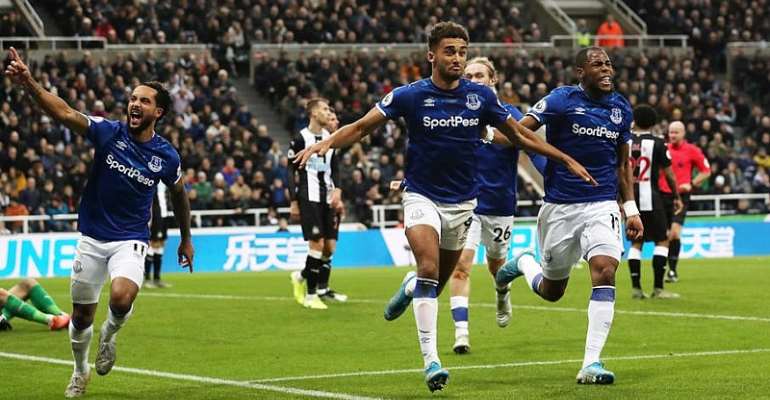 Everton striker Dominic Calvert-Lewin kept up his fine run of form as he scored twice to give Everton a 2-1 win at Newcastle United in a pulsating Premier League clash on Saturday.

It was a second successive victory for Everton's new manager Carlo Ancelotti, who made his debut at Goodison Park with a 1-0 win over Burnley on Thursday when Calvert-Lewin netted a late winner for the Toffees.

Ancelotti also became only the third Everton manager to win his first two Premier League games in charge, emulating the achievement by Joe Royle in 1994 and David Moyes in 2002.

The Italian, who named caretaker Duncan Ferguson his assistant after the club's former striker had overseen a three-match unbeaten run, was delighted and also credited the Scot for some fine groundwork.

"I am pleased, it was a difficult game," Ancelotti told the BBC.

"The team is improving and that is important. The job Duncan Ferguson did was fantastic and the spirit was strong when we arrived.

"Dominic Calvert-Lewin is playing really well. The second goal was a big part of Richarlison. It doesn't matter if you score or not, it is important to work as a team and they did.

Calvert-Lewin added: "We are getting back to where we want to be after a below-par start. It was not good enough and it was vitally important we turned it around.

"He (Ancelotti) is a fantastic manager who has worked with great players and for me as a young player it is the best possible experience."

The result lifted Everton to 10th in the standings on 25 points from 20 games, above 11th-placed Newcastle on goal difference.

Calvert-Lewin fired the visitors ahead in the 13th minute, sweeping the ball home from six metres after a deflected Gylfi Sigurdsson shot fell kindly for him.

Chances went begging at either end before Fabian Schar volleyed in a 56th-minute equaliser, firing past Jordan Pickford after Andy Carroll had headed a Jetro Willems free-kick into the Swiss defender's path.

Everton, whose lightning breaks kept carving open the home team's defence all afternoon, struck again in the 64th when Calvert-Lewin bundled in Richarlison's perfect low cross from the right.

Newcastle keeper Martin Dubravka did well to keep out a fierce Richarlison shot on the hour but was powerless shortly afterwards when the Brazilian raced down the wing and left Calvert-Lewin with a simple finish.

Newcastle threw men forward in the closing stages but Everton held on to extend their unbeaten league run to five games, while the Magpies suffered their first home defeat in nine outings.