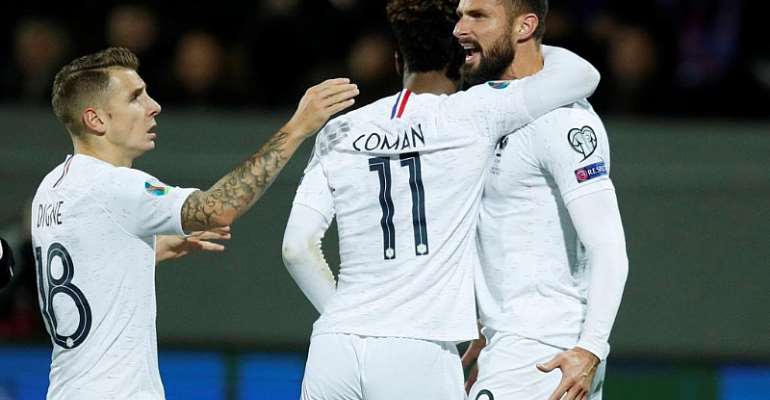 Olivier Giroud's penalty for France helped the team to edge past Iceland 1-0 and keep pace with Turkey in their Euro 2020 Group H qualifier in Reykjavik on Friday.

With key duo Kylian Mbappe and Paul Pogba both out injured, the world champions mustered just enough to end the evening on 18 points, level with leaders Turkey and six ahead of Iceland with three games to go.

France also lost their midfield metronome N'Golo Kante to a hamstring strain in the warm-up.

France now host Turkey in a crunch game at the Stade de France on Monday, having suffered a 2-0 defeat in Ankara in June.

"That's a good win ahead of the big match we're all expecting Monday," said coach Didier Deschamps after his 200th match with France -- 97 of those coming in the dugout.

"It wasn't easy, they were dangerous, even if we had several chances to score again."

Despite little playing time at Chelsea this season, 33 year-old Giroud fired a sure strike past Hannes Halldorsson with a confident spot-kick at the 66 minute mark.

With 37 international goals Giroud is third in the all-time scoring standings for France, behind Thierry Henry on 51 and Michel Platini on 41.

France beat Iceland 4-0 at home back in June and the two had history after their quarter-final meeting during Euro 2016 which Les Bleus also won 5-2.