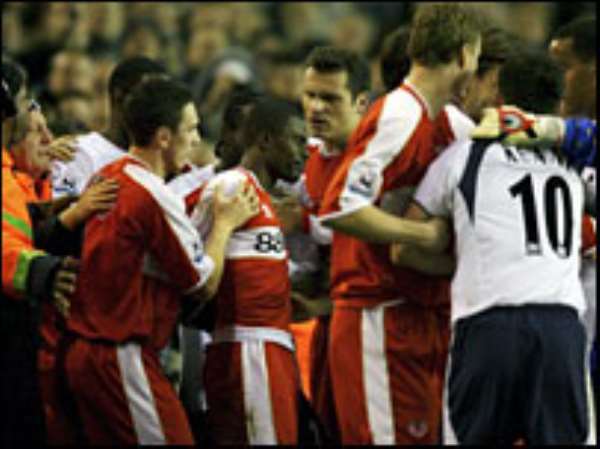 Middlesbrough midfielder George Boateng has had his red card against Tottenham rescinded by the Football Association following an appeal. Boateng was sent off along with Spurs' Didier Zokora after the two were involved in a scuffle which sparked a mass fracas in Boro's 2-1 defeat.

Boro boss Gareth Southgate felt his player had been unfairly punished in being given his marching orders by referee Mark Halsey.
Boateng, who had already been dismissed this season, faced a four-match ban before the decision was overturned.

Both clubs still face a charge of failing to control their players.

Boateng's part in the melee saw him was confronted by Zokora following a challenge on Aaron Lennon.

Spurs boss Martin Jol said after the game that they would challenge the decision which saw Zakora sent off.

But after reviewing the incident he said: "At first I thought Zokora was unlucky to be sent off because he tried to prevent any trouble breaking out.

"I've seen it again now and I felt he probably deserved the sending off because if you are so far away from a situation and run in it does look aggressive.

"You then get a crowd of players coming together and you don't want that."

Zokora is now set to miss Spurs' next three games, including the Carling Cup quarter-final against Southend.