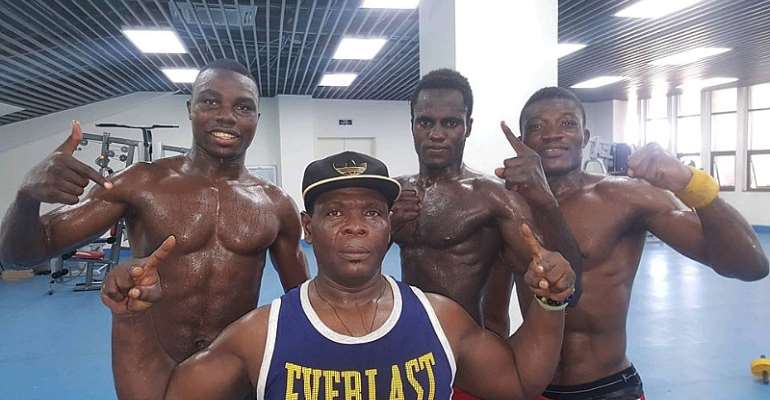 Ghanaian boxers can no longer wait to idle and not be training for over six months.

Even before President Nana Akufo Addo will lift the ban on contact sports, the boxers have started their own training and road work which involves mostly jogging.

All the coaches in the over 20 boxing gyms in Accra say they are starved and want to work to survive.

The boxers say they do not understand why and how political rally and events going on, markets and churches are operating, trotro and taxis are taking full capacity and over, yet they have been barred from working.

Already, promoter Mr Alex Ntiamoah Boakye who stood for Assemblyman and lost in Kinka electoral area noted for being in the hub of boxing and other social engagements they have appealed to the government to consider supporting the Ghana Boxing Authority (GBA) with financial aid and television rights to be able to organize bouts without fans at the Bukom Boxing Arena.

Boakye who is also CEO of Box Office Promotions who are known for staging big local fights said the boxers are also Ghanaian youth so the Covid-19 Relief Package must reach them, in order for them not to look to other professions or trades to make ends meet.

He hinted that the third fight between Michael Ansah aka ‘Bullet’ and Sherif Quaye is still pending and anytime the green light is given for contact sports that super clash will come on with other mouth-watering undercards.

Coach Carl Lokko of Bronx Gym at James Town says he can not allow his boxers to stay at home doing nothing, so he has given then a programme so that they can be jogging daily to keep their fitness and other tactics to maintain their form and discipline.

National coach Dr Ofori Asare who manages the Wisdom Boxing Gym also said as sportsmen and women, his boxers can not stay for a long time, not training, so they have been doing the road work, shadow boxing and watch other bouts as a way of learning new techniques and styles.

He was very sad that the Coronavirus has affected all sporting events including the Olympic Games which has been postponed to next year.

He was optimistic that if the Black Bombers are taken care of very well more boxers can qualify for Ghana, with the pending world qualifiers giving him hope.

At the Attoh Quarshie Gym, the boxers mostly juveniles are not allowing time to fly past them. Coaches Akai Nettey, Larbie have been working on a minimum scale and ensuring that all safety and health protocols are abided.

Coach Eben Adjei of the Black Panthers Gym has been organizing half-scale training with boxers coming in shift batches to ensure social distancing. He also expressed that the boxers need to stay fit every time, so they do light training.

At the Fit Square Gym, Coach Lartekwei Lartey and his charges do not want to be left in the dark, and some of the nation’s most admired boxers like Wasiru Mohammed and rising female international star Faruiza Osumanu are trying their best to knock out the pandemic.

Secretary-General of the GBA, Patrick Johnson also confirms the lack of activity in six months is not easy to bear and promised that they would apply all protocols if boxing returns.

LGBTQ+ Bill: You're shameful backward thinker obsessed with ...
13 minutes ago