Thiem to take victor's sheen from US to French Open 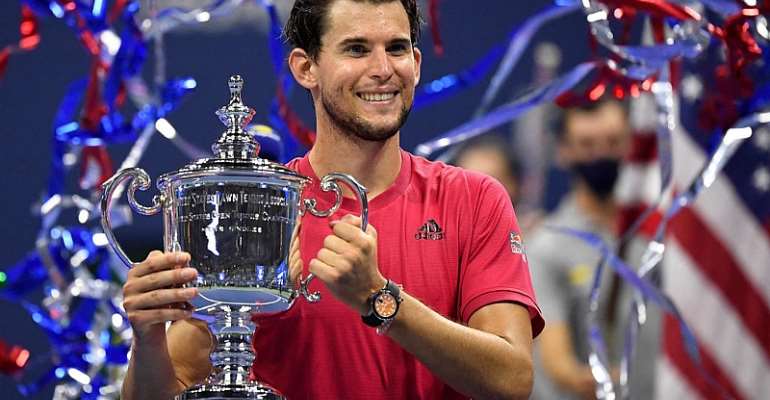 Dominic Thiem will turn his attention to this year's French Open in Paris with a different bearing after his exploits at the US Open. The 27-year-old Austrian, who lost to Rafael Nadal in the 2018 and 2019 French Open finals, claimed the men's singles crown in New York following a four-hour battle with Alexander Zverev.

It finished 2-6, 4-6, 6-4, 6-3, 7-6 on Arthur Ashe Stadium on Sunday. The marathon offered up precedents on two fronts: it was the first time since tennis was opened up to professionals in 1968 that a player had come from two sets down to hoist the men's singles trophy.

Neither had the final been decided by a tie-break.
"I wish we could have two winners. I think we both deserved it," said Thiem who lost to Novak Djokovic at the Australian Open in January.

Back then, fans cheered every bang, twang and wallop of the racquets. In the shadow of the coronavirus, the 23-000 seat arena was without fans as part of the organisers' attempts to prevent the spread of the disease.

Achievement
"I achieved a life goal, a dream of myself, which I had for many, many years," added Thiem.

It so nearly never arrived though.
Zverev smashed four aces and 16 winners past his opponent in a bravura first set.

Thiem, uncharacteristically reticent, aided the 23-year-old German with three double faults as he was broken in games three and seven.

Zverev blazed on and after 79 minutes was two sets up.

He also led by a break early in the third but could not consolidate his advantage to lead 3-1. Thiem immediately recovered the break to gain parity at 2-2 and he took the set when Zverev was trying to level at 5-5.

Streak
From 3-3 in the fourth, Thiem won four consecutive games to draw level in the match and gain an early break in the decider. But he could not make it five in a row.

Zverev came back and served for the match at 5-3.
But he could not clinch the glory and from the brink of defeat, Thiem found himself 6-5 ahead with a chance to serve his way into tennis history.

He fluffed his lines but recovered his poise to win the tiebreak eight points to six.

Battle
Thiem collapsed to the ground with his head in his hands before the pair, who are close friends, embraced on the court.

"It was a tough battle," said Zverev, who burst into tears during the trophy presentation.

"I wish you would have missed a little bit more so I could have hold that trophy up," he added.

“Losing in a tie-break after being two sets and a break up is not easy but I don't think it's my last chance. I do believe that at some point, I will be a Grand Slam champion."

Them, at the French Open, will be exactly that.