And Another Date Passed Without 2014 Imo Carnival 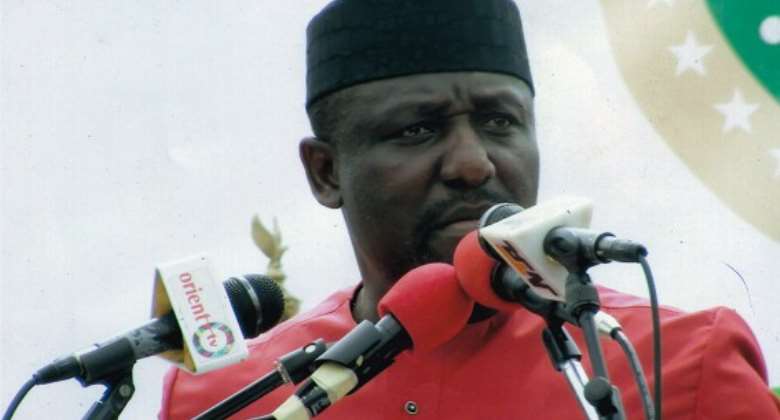 It turned out to be the same old story for the 2014 edition of Imo Carnival as the event failed to hold on the its third date. The event which was initially scheduled for May 6 -13, 2014 was shelved for May 10, 2014 in solidarity for the kidnapped Chibok girls and was letter postponed indefinitely by the state governor, Owelle Rochas Okorocha.

It got a new date which wasTuesday, September 9, 2014 and finally, we have seen that date come and go without a single sign of the carnival.

Rumours have it that members of the organizing committee are divided and are still fighting for a common ground on the shape of the event, while others say that the governor have not really given the event the financial backing it deserves.

Whatever the reason might be, it is a shameful thing for a state like ours to be battling with the postponement of such event for two good years.

In one my articles titled 'Imo Carnival 2014: Peeping through everyone's window', I said “Do not blame me if I say this, but the fact that the present government has enjoyed the skipping of the carnival for the last two years and have decided to hold it in 2014, a year before the famous 2015, means the event will surely turn political”

If they keep moving this event close to 2015, it will surely become 'Polival' instead of a 'Carnival'. And if this carnival fails to hold, a lot of people will be in trouble because they will have to vomit what they have swallowed, unless the owners of what they swallowed will be the usual timid and desperate entertainers whom organizers of such event have been exploiting in the past years.

For God's sake, why can't we differentiate between a carnival and talent hunt shows, singing competitions, or cultural competition? I got a disturbing call that people are registering at the office of a high profile political from Owerri Zone with Twenty Thousand Naira [N20,000] to win Two Million Naira [N2,000,000]. Isn't this bad? Even MTN project fame has not asked for such amount. Aside the N3,000 registration fee for a group that called themselves Association of Imo Musical Artistes [AIMA] who are working closely with the Chairman, Planning Committee of the 2014 Imo Carnival, Mr Paddy Obinna as the only gateway to performing at the carnival, others are fighting to see how they will exploit people on the road to this 'Once in a life time Carnival'.

I am personally against desperate people running to government officials as artistes. Don't the organizers of these events listen to the radio to know who the real artistes in the state are?The desperate artistes should work towards promoting themselves and being known not just waiting for every single opportunity knocking at the Government House to convert their praise tracksinto money. These are songs no radio will ever play and these politicians dance to it as if it has already received a Grammy nomination; I call these artistes 'disabled musicians'.

How can an Imolite who was paid in Calabar and Rivers State Carnivals for his performance be asked to pay in his own state to perform? Shame on our system and those implementing it. By these agents of the government choosing to ignore the best musicians in the state to work with those who have never had one of their songs aired on the radio, they will end up parading nothing close to the best to crowd who will be coming to watch the best of Imo musicians and the message we will be sending out will be that there are still no single good musician in the state. Let us give room for the best brains to thrive; this is the only way those behind would want to work harder, but if the last person gets a gold medal after a race, what is the essence of working hard, when gold is assured no matter the effort put in. This system is simply destroying music and musicians in the state because soon, no good artiste would want to base in this state which gave birth to more than 70% of successful entertainers of Igbo extraction.

Dear Governor, this is a carnival for Imolites not for any party alone, if we all cannot enjoy it, then it should never hold.

I want to plead with you to investigate the various payments [exploitations] I mentioned because having something like that attached to your name is bad for the present and the future of your political career. If this continues, you will be an enemy to every man holding a microphone.

Again, if no one is ready to put up a real carnival, let it be rebranded because we are tired of these failed dates. Groups are spending money on their rehearsals and no one is refunding them. If this is really a carnival, we need to borrow 'work books' from Rivers and Cross River States. Their's are success stories we can emulate, it is high time we stopped these exploitations and postponements.

Chinedu Hardy Nwadike is an entertainment promoter in Imo State, he writes from Owerri. +2348038704454, [email protected]

Hottest Photo Reports
Catch up with all the political quotes from our politicians.
Advertise here
More Readers Choice
ModernGhana Links
Micah “Emeka” Richards Talks Up Nigerian Jollof As He Meets With Football Fans In Nigeria.
Nigerian Lady, Miss Mary Timms Emerges Face of NGEA in USA
Amira Ibrahim Unveiled as Judge Ahead of Miss Tourism Nigeria 2017
Maheeda Is Bad Egg To Our Society- Sandra Ifudu
A Must Read:Men of God in Nigeria and Divorce
Nigerian Footballer, Emmanuel Emenike At Loggerheads With Enugu State Government Over Land Issues
Solid Star Gives Me Goose Pimples’ – Tiwa Savage
I Never Cheated On My Ex-Wife—Funky Mallam
Sarkodie Advocates For Breastfeeding In Ghana
TOP STORIES