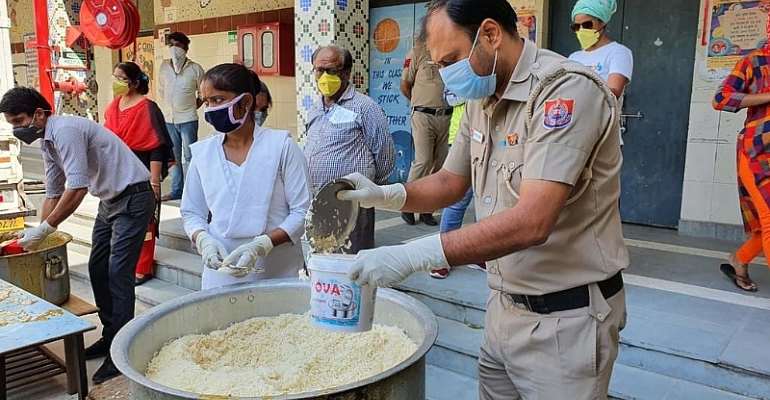 India has allowed some public sectors to operate despite a nationwide lockdown to contain the Covid-19 outbreak. Most measures focus at easing pressure on farming, which employs more than half the nation's workforce.

Even as easing of some lockdown measures came into force on Monday, India registered the biggest single-day spike of over 1550 of Covid-19 cases within a span of 24 hours, recording over 17,265 cases.The death toll stood at 543.

Some key sectors such as health services, agricultural activities, financial services and public utilities are now exempted from restrictions in one of the world's strictest lockdowns which stays in place till May 3.

However, strict advisories have been sent out chief secretaries in states asking sectors to maintain physical distancing.

"I would again urge you to ensure compliance of the revised consolidated guidelines, and direct all authorities concerned for their strict implementation in letter and spirit without any dilution and to ensure strict compliance of lockdown measures," said Home Secretary Ajay Bhalla.

Limited industry and farming have been allowed to resume where employers could meet social distancing and hygiene norms, and migrant workers were allowed to travel within states to factories, farms and other work sites.

Prime Minister Narendra Modi's government has come out with detailed guidelines for the phase-2 of the lockdown but some of the rules have since been tweaked, while some states have decided to forge their own path on reopening.

To lessen economic hardships brought on by the shutdown, the country's financial capital Mumbai has been allowed a few activities including work at infrastructure projects and wedding events, only if these are outside designated containment zones and follow strict safety procedures against coronavirus.

The Delhi government, on the other hand, has announced that the capital will be under lockdown as it accounted for nearly 12 per cent of the total cases in the country. The government will, however, assess the situation again after a week.

"Keeping in mind the lives of all Delhi residents, we have that there will be no relaxation in lockdown norms from tomorrow. We will sit in a meeting with all experts again on April 27 and review the situation. If need be, the lockdown norms will be relaxed after that," chief minister Arvind Kejriwal told RFI.

Even the chief minister of northern state of Punjab, Amarinder Singh stated that the curfew in the state will not be relaxed, except for the procurement of wheat. The situation will be reviewed again.

Ten fresh cases of Covid-19 were reported in Punjab on Sunday, taking the total tally to 244 in the State, according to a government statement.

The southern state of Kerala, which could most probably become the first state to flatten flatten the Covid-19 curve, reopened districts in a staggered manner.

The Leftist government has color-coded 14 districts of the state into four zones-- Red, Green, Orange A and Orange B - for containing the pandemic, lifted restrictions for two zones.

“Private vehicles will be allowed as per an odd-even scheme within other districts,” state police chief Loknath Behera said in a statement.

Restrictions on domestic and international flight operations will be lifted once the government is sure that the pandemic is under control, and poses no danger to citizens.

Schools, colleges, malls, cinema halls and most businesses barring those providing essential services such as groceries and pharmacies continue to remain shut. All public gatherings - social, political or religious - are also still banned.