Afghans bury victims of US airstrike 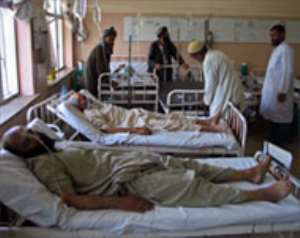 Families in Afghanistan started to bury their dead after a US airstrike killed dozens.

Some of the heaviest fighting since 2001 has claimed about 300 lives in the past few days.

On Monday, seven people were killed in attacks carried out by fighters and in total more than 20 attacks linked to Taliban loyalists have been reported in 12 provinces in the country in the past two days.

The US-led coalition said on Tuesday that 20 Taliban rebels had been killed in the airstrike on the village of Azizi in the province of Kandahar late on Sunday or early Monday, but up to 60 more may also have died.

However, villagers and human rights groups said the civilian toll from the air and ground assault, that lasted several hours, was higher.

One villager, Haji Ikhlaf, told The Associated Press that 26 civilians had been buried by early Tuesday.

A teacher from the area told AFP that he had seen 40 bodies and helped to bury 28.

"We've buried women. We've buried children," Ikhlaf said by mobile phone from the area, which has been closed to reporters. "They are killing us. We are so angry."

The coalition airstrike on Azizi was the third clash there in a week.

US planes bombed an Islamic school, or madrassa, where rebels were suspected of hiding, before hitting surrounding homes as the insurgents took shelter.

Up to 27 rebels were killed in a ground battle and airstrike in the same area on Thursday.

In other violence, a doctor, two nurses and their driver were killed when a remote-controlled bomb was detonated underneath their car about 40km west of Kabul.

Three police officers were killed and six others wounded when suspected Taliban fighters attacked their convoy in Helmand.

The provincial police chief, who was travelling in the convoy, survived.

According to coalition and Afghan figures, the latest violence brings the toll in attacks that erupted a week ago to 305, mostly rebels.

The violence is the worst in four years and comes before preparations for the US-led coalition to hand over security operations in southern Afghanistan to Nato by July.

Despite the violence, the president, Hamid Karzai, is due in Iran on Thursday for a visit intended at boosting ties, according to a source in the Iranian presidential office.

"President Karzai will visit Iran for three days and hold talks with top Iranian officials aimed at boosting bilateral relations, and follow up on a previous agreement on reconstruction projects," he said.

Karzai, who on Tuesday was holding talks in Abu Dhabi on reconstruction aid, is also due to meet Iran's supreme leader, Ayatollah Ali Khamenei.

You're A Blatant Liar; I've Never Attacked Any Religious Lea...
2 minutes ago