By Alice RITCHIE with AFP bureaus 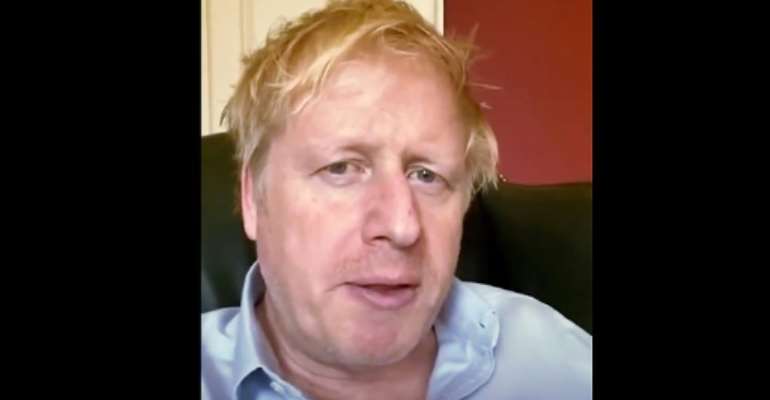 British Prime Minister Boris Johnson is the most prominent figure to have been hospitalized with the coronavirus. By - (10 Downing Street/AFP/File)

Britain's prime minister was battling the coronavirus in intensive care Tuesday, the highest-profile case in the pandemic that continued to chalk up new death toll milestones in the United States and Europe.

Boris Johnson's fight against the disease underscored the indiscriminate nature of COVID-19, which has restricted freedoms for some four billion people, wrecked the global economy and upended society.

The pandemic's relentless death march across the planet has already claimed more than 73,000 victims out of 1.32 million confirmed cases, with warnings that much worse is yet to come.

A record new surge of 833 deaths in France and a jump in the Italian death toll on Monday doused tentative hopes of a beginning to the end of the agony in European hotspots.

However, glimmers of hope flickered in the daily diet of deadly statistics, with US President Donald Trump tweeting there was "light at the end of the tunnel."

In New York state, the US epicentre of the crisis, the rate of growth in the death toll appeared to be slowing, although state Governor Andrew Cuomo warned that "now is not the time to be lax."

In China, where the virus originated late last year, there were no new deaths reported for the first time.

But amid fears of a second wave in Asia, Japanese Prime Minister Shinzo Abe was expected to declare a state of emergency later Tuesday as cases spike, especially in Tokyo.

The United States is bracing for its "Pearl Harbor moment" as the country's death toll exceeds 10,000. By Bryan R. Smith (AFP)

The virus is stretching medical facilities to the limit and the World Health Organization warned there was a global shortage of six million nurses.

People around the world have been forced to improvise as supplies run short, with bodies packed in cardboard coffins in Ecuador and a mosque converted into a makeshift mask factory in Iran.

Undertakers in New York are so overworked that a city official raised the possibility of carrying out temporary burials in a public park.

"Trenches will be dug for 10 caskets in a line. It will be done in a dignified, orderly and temporary manner. But it will be tough for NYers to take," tweeted Mark Levine.

Funeral home director Pat Marmo from New York city said: "It's almost like 9/11, going on for days and days and days," referring to the terror attacks on the city in 2001.

Governments around the world are scrambling to put together rescue packages to stem the economic damage from effectively shutting down global commerce, as fears loom of a devastating recession.

Japan has promised a $1-trillion stimulus package, nearly twice as large as measures taken during the 2008 financial crisis and a staggering 20 percent of GDP in the world's third-top economy.

"We built the greatest economy in the world. I'll do it a second time," he said.

EU finance ministers are expected to clinch a deal to use the eurozone's 410-billion-euro bailout fund to fight the virus but the bloc remains divided on pooling debt to issue "coronabonds."

But France warned it was heading for its worst recession since World War II and German Chancellor Angela Merkel said the European Union was facing its "biggest test" since its founding in 1957.

Analysts at Oxford Economics said the pandemic "may trigger annual GDP declines among the worst seen in the last 100 years" with millions of jobs being shed around the world.

However, stock markets chose to see the glass half-full on Monday, with the Dow Jones index soaring 1,600 points as traders saw hope the pandemic was reaching its apex.

And away from the multi-billion packages and Wall Street swings, the coronavirus is affecting millions of ordinary people trying to make ends meet.

On a usually bustling wharf in Senegal's capital Dakar, 23-year-old fishmonger Galaye Sarr said his produce normally gets exported to Italy but trade has dried up.

"The boats have been docked for a long time, all because of the coronavirus. And even if they go and catch fish, we can't sell it," he told AFP.

"We're still trying to keep going, hoping that one day God will rid us of the curse."

Don't worry yourselves contributing Ghc100 to support Nation...
19 minutes ago