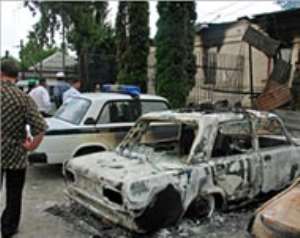 A suicide bomber has killed at least seven people, including a top Russian official, in the southern Russian republic of Ingushetia, officials have said.

Dzhabrail Kostoyev, deputy head of Ingushetia's interior ministry, and two of his guards died after a bomber drove a car packed with explosives into his convoy as he was on his way to work on Wednesday, local police told Russia's official news agency.

Four civilians in a passing car were also killed in the blast, officials said.

Kostoyev had been targeted twice last year. In the first incident, unknown assailants fired a mortar at his office, although he was not there at the time.

In August, his car hit a landmine, seriously wounding Kostoyev and his driver.

The overwhelmingly Muslim Ingushetia borders the troubled breakaway Russian republic of Chechnya. Violence has spilled over into the republic in recent years, with several attacks on Russian officials and reprisal raids by Russian forces.

In the worst incident, 92 people died in raids by Chechen militants on the main Ingush city of Nazran in June 2004.

You're A Blatant Liar; I've Never Attacked Any Religious Lea...
38 minutes ago