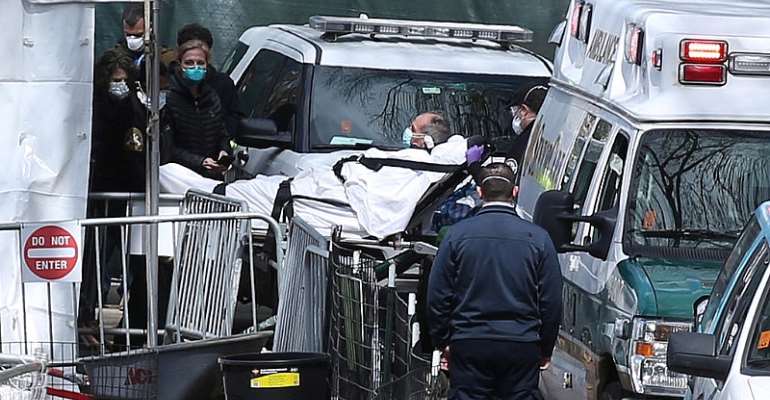 The United States has recorded 1169 deaths from coronavirus in 24 hours, the highest daily death toll of any country so far. Over 5900 people have now died since the pandemic began and the country accounts for around a quarter of all known infections around the globe.

The official tally comes from figures reported by the Johns Hopkins University between 8:30 pm Wednesday (0030 GMT) and the same time Thursday.

More than 241,000 positive cases have been reported across all 50 states.

The world's highest death toll record was previously reported by Italy, where 969 people died on 27 March.

The youngest American victim was reported earlier this week – a 6 week old baby in the state of Connecticut.

White House experts say between 100,000 and 240,000 Americans could ultimately die from the disease.

Disaster response agency FEMA on Thursday asked the US military for 100,000 body bags.

In New York, the epicenter of the US outbreak, Mayor Bill de Blasio urged residents to cover their faces when outside and Vice President Mike Pence said there would be a recommendation on the use of masks by the general public in the next few days.

Around 85 percent of Americans are under some form of stay-at-home order.

Social distancing
Dr. Deborah Birx, the coordinator of the White House task force on the coronavirus, had a message for Americans on Thursday: do better at social distancing.

Just a couple days into a new, 30-day extension of guidelines released on 16 March, Birx said data showed not enough people were following them.

The recommendations encourage people not to gather in groups larger than 10 and to avoid dining in restaurants or bars.

"When we said that, now over 16 days ago, that was serious," Birx said, noting that the people who were now becoming sick would have gotten the virus after the guidelines first went out.

She said that not all U.S. states had followed the guidelines.

"We know what can be done. And others are doing it and most of the people in the United States are doing it. It's our communities, it's every American that has to make these changes," she said.

It appears President Donald Trump did not appreciate her message.

He interrupted Birx several times during a daily press conference on Thursday to insist that his country was doing a great job and he pointed out the states where the virus had not taken off dramatically.

No economic rebirth anytime soon
Trump has faced criticism for playing down the outbreak in its initial stages. He said early on that the virus was under control and repeatedly compared it to the seasonal flu.

Last week he argued the time was right to re-open the U.S. economy, complaining that the cure was worse than the problem and setting a goal of economic rebirth by Easter on April 12, a plan he later ditched on hearing the revised death toll projections.

The US economy has taken a hit, with new figures showing that an extra 6.65 million Americans signed on for unemployment benefit last week, taking to 10 million the number of people in the US who lost their jobs in the last two weeks of March.

A government bailout package of 350 billion dollars for companies with over 500 employees goes into effect today but the crisis has already taken its toll.

Financial ratings agency Fitch on Thursday predicted that the US and eurozone economies would shrink this quarter by up to 30 percent as struggling businesses slash investment and unemployment dampens consumer spending.