Colonel I. K. Acheampong At Koforidua 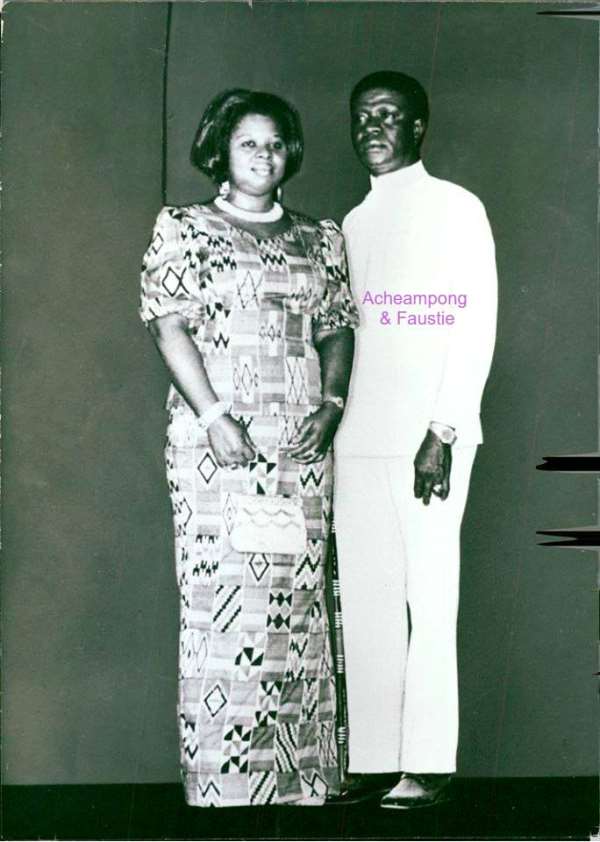 It was mid-year 1974, the chairman of the NRC, Colonel Ignatius K Acheampong was in Koforidua, one morning.

Colonel Acheampong was in town to open the newly built Ghana Commercial Bank (GCB), and also, to launch the beginning of operations of the Intravenous Infusions Limited (IIL). The first of such a facility, in west Africa.

I had seen his pictures in the daily Graphic, heard his voice on GBC radios, but I wanted to see the head of state, physically.

So, I came to the Jackson's park.
There was a durbar being held prior to the launching ceremony. The Swiss ambassador was there, the Asantehene (and the overlord of New Juaben), Otumfuo Opoku-Ware, as well as all the top National Redemption Council Commissioners were at the park.

I remember the Swiss Ambassador, incorrectly, pronounce Opoku-ware as "Opoku-were".

I saw the Otumfuo in his traditional regalia, being introduced to the gathering at the durbar grounds. He was a tall, hairy, brown skin guy, on the heavy set, very noble looking.

That was the first and last time I saw the Otumfuo. He had come to Koforidua, in his 6-door Mercedes Benz saloon Car.

From the Jackson's park, the head of state and his entourage, came to the new Ghana commercial Bank (GCB) premise. I was a bit late. I could not see Colonel Acheampong clearly. From a distance, I saw a group of Senior Military officers on the top Deck at the GCB building, and I assumed the NRC chairman was among them.

What attracted my attention was a group of men, all wearing joromi attire, dispersed among the crowd. I assumed immediately that, they were part of Colonel Acheampong's security detail. The crowd was thick, and I was short and clueless at that time, so I was not able to see the Chairman at the GCB facility, from close range.

I heard the GCB facility was built at a cost of 4 million Cedis. In those days, the average price of a saloon car was about 4,000 Cedis. Information that went around was that, the Intravenous Infusion limited project was a joint venture, between two Koforidua indigenes, Mr. Samuel Appenteng and Mr. Osei, and the Swiss government. From the GCB, Acheampong and his entourage headed for the Intravenous Infusions Limited (ILL) Grounds at Effiduase.

I ran out of luck at Effiduase too. I reached the ILL grounds while the dignitaries, were completing their tour of the facility. I clearly saw Colonel Roger Felli. He had a smooth face, and I thought I was day-dreaming, when I saw him. Wow! here is colonel Felli! The man I always hear about, in the news. He was about to come out of the facility. I still remember his face vividly, today.

Instead of waiting patiently at the exit door, to catch a glimpse of the dignitaries who were about to come out of the facility, I decided otherwise. I thought I would see them better if I went inside. I forced my way into the facility, not knowing the dignitaries, had already come out, at a different exit point, so I missed them, all (apart from Col Felli).

I remember a security guy at the facility, querying me: “What is your purpose of coming to the facility”? I totally, ignored him. At the facility, all I saw were big manufacturing machines. Those machines meant nothing to me, at the time. I never saw Acheampong, but I told my friends: “Oh! I saw him, he looked this and that” etc.

5 years later, I heard General Acheampong, and Colonel R. Felli, among others had been executed by firing squared. ..Ghana politics!!!.

The Acheampong regime, did a lot for Koforidua. Even though, the Koforidua merchants had preferred initially, the Progress Party government to the military. Some of the infrastructures initiated or completed during the Acheampong Regime, included the following:

. The Koforidua-Adweso road (R42) expansion, into a divided highway.