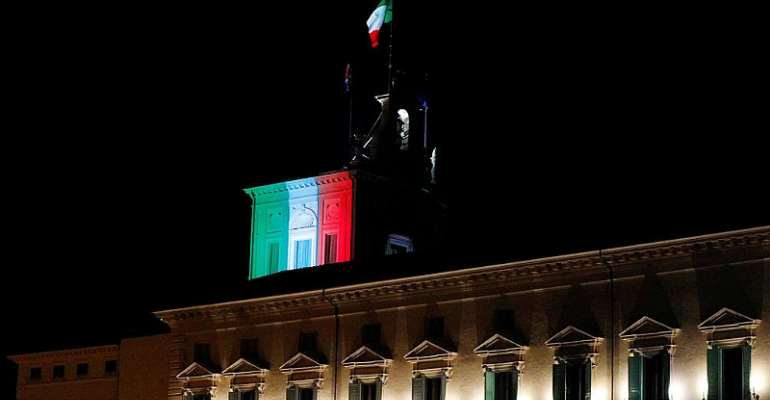 Italy's health authorities are saying it is too early to be lowering one's guard and are advising the government to maintain the national lockdown in place.

Before restrictions can be lifted, doctors say the number of new infections must significantly come down.

The total number of infections in the country since the outbreak began 40 days ago has exceeded 105,000 and the death toll, as provided by the civil defence department, stands at more than 12,000.

837 of those deaths occured in the last 24 hours
As Italy enters its fourth week in lock down mode, with strict rules to stay indoors except for buying food or medicines, the Italian Prime Minister Giuseppe Conte is expected to announce that the 3 April deadline to lift the lockdown will be extended until at least after Easter.

Easter celebrated via a screen
For Italians it will be the first time in their life that they will not see the huge crowds at the Vatican for what is normally one of the busiest times of the year.

This year for Pope Francis will be celebrating his Holy Week and Easter services with a television and internet audience.

And another tradition Italians will not be able to maintain this year is going in large groups of friends and families to have their picnics outside their homes on Easter Monday.

The atmosphere will be very different with everybody at home, praying and hoping that these limitations to their freedom will come to an end soon.

Flags at half mast
On Tuesday, flags flew at half-mast across the country and a minute's silence was observed to mourn the many victims of Covid-19, to express solidarity with the suffering families and show support to the heroes in this war: the doctors, nurses, health workers and volunteers.

Italy is the worst hit country in terms of number of dead from the coronavirus and the death toll of doctors has also continued to rise, and has reached 66.

Many Italian relief volunteers are facing reprisals when they return from red zones; neighbours are scared to have anything to do with them because they could be carrying the virus.

The head of the Italian Red Cross Francesco Rocca called “this stigma intolerable and absurd” on people who are on the frontlines helping those in need.

Hotels used for quarantined patients
Italians are also increasingly worried about the economy and an inevitable recession.

Many sectors will suffer not least Italy's important tourism industry. Many hotels have had to close due to lack of guests and business.

But a number of them, not just in Rome, but also in the north, have made themselves available to house coronavirus patients whom the national health service has placed under observation or who must quarantine because of their symptoms but are unable to do so at home for fear of infecting relatives.