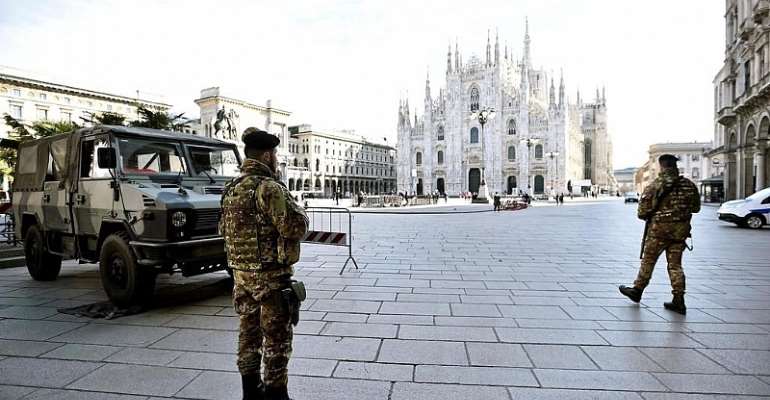 The Italian government has signed two decrees that will quarantine more than 15 million people, or a quarter of the population, for nearly a month, to try to stop the spread of the Covid-19 coronavirus. France, Europe's second-most contaminated country after Italy, has seen its infections increase to close to 1,000 cases.

In a press conference overnight, Prime Minister Guiseppe Conte announced that movement into and out of the regions around Milan, the country's financial capital, and Venice would be severely restricted until 3 April.

People will only be allowed in or out of the zones for professional or emergency situations. Those who violate the restrictions can be punished by fines and jailed for up to three months.

“These measures will provoke discomfort and imposes sacrifices, but this is the moment to be responsible,” said Conte, saying the measures are to protect the health particularly of the elderly who are most affected by the coronavirus.

With these measures “we will succeed” in containing the epidemic, he promised.

Italy has recorded 233 deaths from the virus, and 5,883 infections, making it the country with the most deaths after China.

One metre apart
People in the quarantine zones will be advised to stay at home as much as possible. Schools, museums, gyms, theatres and cultural centres will be closed. Bars and restaurants can stay open, but only during the day, and they must ensure that everyone is seated at least a metre apart.

The decrees also close cinemas, theatres, museums and discotheques in the entire country.

The unprecedented measures come after the World Health Organization (WHO) urged Italy on Friday to keep "a strong focus on containment measures".

The measures add to decisions already made to close schools and universities in the whole country until mid-March. The government on Saturday also announced it was recruiting 20,000 hospital staff, to increase its intensive care facilities from 5,000 to 7,500 beds, and to double the number of spots in pulmonology and infectious disease centres.

France on the defensive
French President Emmanuel Macron has called an emergency defence meeting for Sunday evening to address the growing threat of the disease.

The latest official figures show 949 infections in the country, with 16 deaths.

The national assembly announced a third positive test of the virus in a lawmaker, the Elisabeth Toutut-Picard of the ruling LREM party. She spent Friday night in hospital, but is now home where she must stay for two weeks.

In the Haut-Rhin and Oise departments, two hotspots for the virus, all schools and day-care centres will be closed as of Monday for at least two weeks.

Large events throughout the country continue to be cancelled, in order to avoid groups of people who could transmit the virus to each other.