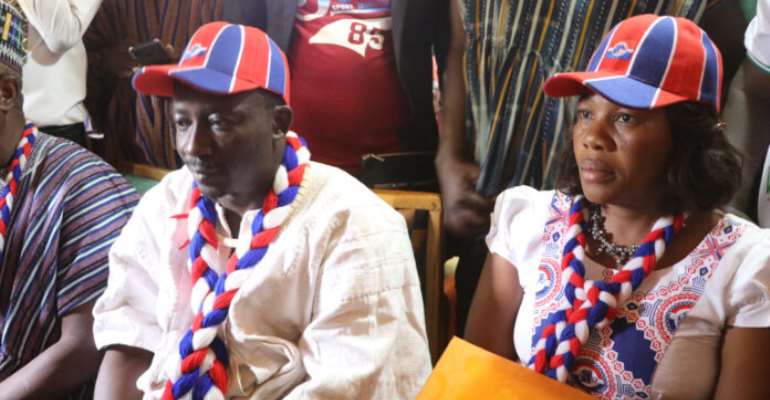 The chances of the North East regional minister Solomon Boar to return to parliament is likely to suffer as a finance officer of the Bagabaga College of Education Tingoti Francis Kombon has filed to challenge him in the ruling NPP’s primaries slated for April 25 for the Bunkpurugu Constituency.

Mr. Tingoti who filed his nomination on Friday is seen by his supporters as the right choice for the 2020 parliamentary elections since they believe the incumbent who doubles as the regional minister for the area has failed to live up to expectations. The ceremony which attracted a huge crowd of party faithful, some of whom are delegates in the upcoming primaries, is said to have sent shock waves in the spines of fanatics of the incumbent MP.

Delegates Choice
Some delegates who spoke to Starr News believe the incumbent MP must be shown the exit to increase the chances of the party in the 2020 elections. One of them who gave his name as Solomon said, “if you look at his(Solomon Boar) performance in the last two elections it will tell you that the people are not happy with him. His votes dropped significantly so the party should not make a mistake to repeat him as it will be suicidal. Another delegate who did not give his name told us, “there is nothing to show in our area since he entered parliament. See how our roads are bad, our young people are not getting jobs to do. So we need someone who thinks about the people to lead us into 2020 else we will lose this seat”.

MP has lost touch
Speaking to Starr News about why he entered the race, Mr. Tingoti Francis said his desire to serve his people is pushing him to contest.

He said, “I have been serving my people for ages but if you look at where we are now, I think serving my people as MP will give me a bigger platform to lobby for development for the area. Our area has been deprived for a long time hence the need for someone who is not reactionary to lead the people and that person is me”.

“Our MP who has been there for two terms has done his part and the people want a change and I responded to the call for change to ensure the party maintains the seat. If we keep our MP as our candidate we will lose this seat and as someone who loves the party, I want to ensure we keep the seat”, he stressed.

“National interference”
On rumored attempts to impose the incumbent MP Solomon Boar on the party by some elements at the national level, Mr. Tingoti warned of dire consequences for the party in the general elections. He said, ” We have heard some people at national say that the incumbent must be maintained so they are planning to come and help him. Let me say this, our constituency is not like other constituencies, if that is done, it will even make us lose more. If they want they should come and do their own survey here, it will tell them what the people want. I am not contesting because I just want to be MP, I want to make sure the seat remains with the party and also win the presidential here”.

Anger over declaration by secretary
An open declaration by constituency Secretary Paul Louknaan for the incumbent MP to be retained has incurred the wrath of Mr Tingoti Francis Kombon who believes the regional executives must call the executive to order.

“This action of the constituency secretary who represents the party at such functions flouts the rules of engagement regarding the primaries. These things can create problems for us in the primaries. I expect the regional executives to take action against the secretary and any other person who openly endorses or promotes a candidate”.

Though four people have picked up forms and filed, the battle for who represents the party in the 2020 parliamentary elections will be a straight fight between the incumbent MP Solomon Boar and Tingoti Francis Kombon.