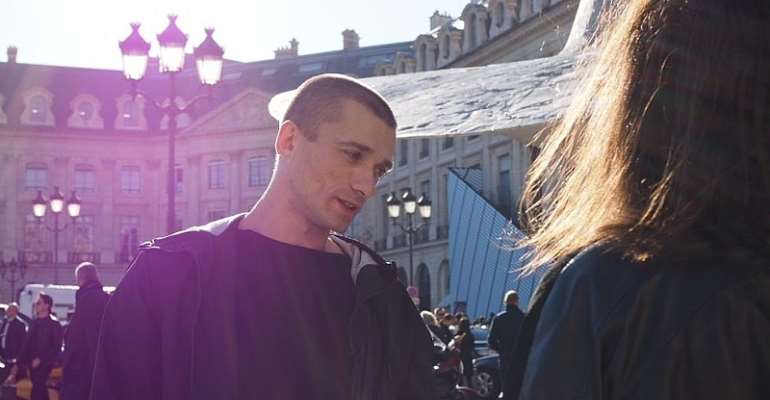 The girlfriend of the Russian artist Piotr Pavlensky was taken into custody Saturday night, suspected of having participated in the "invasion of privacy".

According to the Paris public prosecutor's office, she was taken into custody for "invasion of privacy" and "dissemination without the person's consent of images of a sexual nature", as part of the investigation opened Saturday following the filing of a complaint by Benjamin Griveaux.

Meanwhile, Piotr Pavlensky, who claims to have leaked the sex video at the centre of the Griveaux case, was arrested by French police on Saturday over an unrelated act of violence, the Paris prosecutor's office said.

The political refugee was taken in for questioning over an alleged instance of "armed violence" that took place on 31 December.

Too hot to handle in his home country Russia, the gaunt looking Pavlensky, 35, fled to France where he has caused uproar by putting the sex video online which forced Griveaux to withdraw from the mayoral race.

Griveaux, a 42-year-old MP, has brought a legal case against Pavlensky over the release of the video and an enquiry has been opened, the prosecutor said later Saturday.

Griveaux "is someone who constantly brings up family values, who says he wants to be the mayor of families and always cites his wife and children as an example. But he is doing the opposite," Pavlensky told the Liberation daily.

The artist has a track record of causing outrage.

He made global headlines in 2013 after nailing his scrotum to Red quare in Moscow and two years later doused the doors of the FSB secret police headquarters with petrol and set them on fire.

In October 2017, he set fire to offices of the Bank of France on Place Bastille, site of the attack on the infamous fortress at the start of the French revolution in 1789.

The bank's presence on such hallowed revolutionary ground was "historically shameful", Pavlensky said.

For that he was sentenced to three years' jail, two suspended, for the destruction of other people's property.

His hardline stance and eye watering protests have elicited a mixed response among Russian opposition groups.

Some defend his actions as a form of engaged art but others such as late rights activist Lyudmila Alexeyeva were blunter, branding his actions "idiotic".

The December 31 incident, for which Pavlensky was arrested on Saturday, involved a fight at a Paris apartment in which a knife from the kitchen was used.