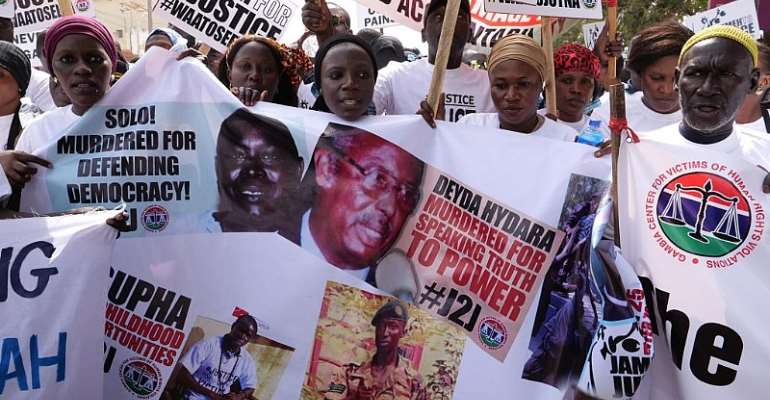 Hundreds of Gambians marched on the outskirts of the capital, Banjul, on Saturday, calling for justice over the human rights abuses, including forced disappearances, rape, and murder which occurred during ousted dictator Yahya Jammeh's 22-year rule.

"We want justice and we want it immediately," shouted the demonstrators, who wore t-shirts with #justicemustprevail and holding photos of loved ones who died or disappeared under Jammeh's rule.

They are also demanding that Jammeh's former Alliance for Patriotic Reorientation and Construction party (APRC) be banned.

The truth of Jammeh abuses revealed
The establishment of the Truth, Reconciliation and Reparations Commission (TRRC), which has had 190 witnesses to abuse publicly appear before the investigators, has brought more of Jammeh's alleged abuses to the fore.

A new documentary on the murder of dozens of West African migrants during Jammeh's reign, including more than 40 Ghanaians, was released this month, calling for justice for their deaths.

A leaked telephone conversation earlier this month showed that Jammeh is determined to return from exile  to Gambia a move that incited his supporters to demonstrate for his return, while others have previously taken to the streets to call for Barrow to step down after he pledged to rule for only three years.

The government delayed their response, but Justice Minister Abubacarr Tambadou indicated last week that the former dictator would "face immediate arrest and charges of the most serious kind" if he returned, including "crimes against humanity."

"We are sending message to government to act fast, because... justice delayed is justice denied,” said Maron Baldeh, whose husband lieutenant Basiru Barrow was executed in 1994. She participated in the protest.

“Yahya Jammeh should be arrested and put on trial," she added.