The Salifu Dagarti Story Is a Mixture of Heroic Professionalism and Patriotism, But… Part 2 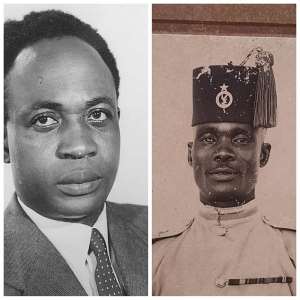 Reading the brief profile of Supt. Salifu Dagarti that was recently published by Ghanaweb.com with the caption of “The Story of Supt. Salifu Dagarti; the Man Who Took a Bullet for Kwame Nkrumah” (12/29/19), I could not help but wonder whether the anonymous author of this “profile-in-courage” and heroism story, in the case of the subject of this column, did not, somehow, think, by the wistfully noncommittal tone of his biographical writeup, that Mr. Dagarti could have also put the First Law of Nature, which is, self-preservation at the forefront and understandably ahead of that of the man whom he so valiantly and messianically saved; much so, when it also well appears that nearly every one of his police-officer colleagues and associates who were supposed to have helped protect the life of President Nkrumah had reportedly ducked for cover that January 2, 1964 Thursday, when Constable Ametewee, who had also been posted to the Flagstaff House to fortify the security detail of President Nkrumah, decided that Ghanaians had had enough of this increasingly overbearing and insufferable autocrat who was also increasingly beginning to treat Ghanaians and their country as the personal and private property of himself and his 30-year-old Egyptian wife.

We are informed that this was about the fifth time that an assassin’s bullet missed its prime target. In other words, it well appears that President Nkrumah was one extremely lucky Ghanaian leader. But what is rather curious in the Ametewee incident or assassination attempt is the fact that it well appears that some elements within the top hierarchy of the Ghana Police Service (GPS) had been scheming to have the “Kangkang Nyame Supplicant” liquidated. It would become clearer two years down the line, when Mr. JWK Harlley, the extant Inspector-General of the Ghana Police Service (IGP), was offered the chairmanship of the cabinet of the National Liberation Council (NLC) junta that had recently ousted President Nkrumah and his so-called Convention People’s Party regime. We must here, however, quickly add that Mr. Harlley promptly turned down the offer of heading up the National Liberation Council and instead accepted regular membership of the same.

We also learn that at the time of the Ametewee assassination attempt, the President who had just emerged from his Flagstaff House office to travel the short distance to the old European slave dungeon, the Christiansborg Castle at Osu, to have his lunch, was wearing a bulletproof vest. Which may most probably have played as major a role as that of Supt. Dagarti who used his own body as cannon-fodder, as it were, to prevent the professional marksman from snuffing the living daylights out of President Nkrumah, in New York City street parlance. So, in a quite instructive sense, what the foregoing clearly tells us, the readers, is that President Nkrumah was on the lookout for any dastardly eventuality. One troubling aspect of this story, however, is the apparent fact that the man who so heroically and sacrificially gave up his life in order to preserve that of the leader he was officially charged with protecting did not appear to have been issued a bulletproof vest or jacket; which scandalously indicates that Supt. Salifu Dagarti’s life did not seem to have been deemed to be worth a farthing pesewa in the strategic or security playbook of the man whose life he evidently seemed to have loved and cared about much more than his very precious own, or at least as much as his own.

This most tragic incident ought to significantly offer Ghanaian and African security studies scholars and political scientists and theorists a case-study opportunity to critically examine the scandalously callous relationship that appears to routinely exist between many a dictatorial and, therefore, a highly unpopular leader and the individual and the collective membership of his/her security detail. In other words, why do many an African leader not put the same existential premium or protective value that they place on their own lives on the lives of those who are charged with extremely taxing duty of the protection of these same leaders? Such a study will definitely offer us a more informed appreciation of how African leaders, for the most part, and Third-World leaders, in general, do not seem to care reasonably well enough about the very people or citizens whose mandate they have been generously afforded in exchange for the provision of the most responsive and responsible attention to the interests, needs and aspirations of these electors and citizens.

Which may also clearly explain why the rest of the members of the security detail of President Nkrumah reportedly took cover from the trajectory of the bullets of Constable Ametewee as their first line of defense or, rather, their gut reaction to the Ametewee assassination attempt. Put into simple English, would there have been anything wrong with having a bulletproof vest-protected Supt. Salifu Dagarti surviving the assassin’s bullet in much the same way and very manner as President Nkrumah? In other words, was Supt. Dagarti’s life much too cheap for the latter to have either merited or qualified being issued a service-provided bulletproof vest or jacket? These are some of the equally relevant questions that need to be probed and meticulously researched by the Nkrumaist historians and scholars and, in fact, historians of African politics and national security as well, in this era of increasing global instability and violence.