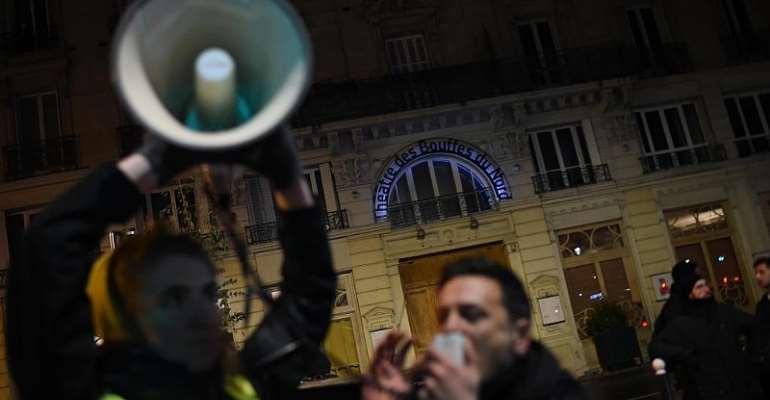 Several dozen protestors against pension reform have attempted to disrupt a Paris theatre performance attended by President Emmanuel Macron and his wife Brigitte. A journalist has been taken into police custody for questioning, after he alerted the public to the president's presence on Twitter.

Several dozen demonstrators shouting "All together, general strike" and "Macron resign" faced a large contingent of police outside the Bouffes du Nord theatre in the tenth district of the capital on Friday night.

An attempt to enter the building was blocked by security forces, and the performance went ahead unhindered.

Later in the evening, the first couple left under police escort, with protestors still shouting slogans.

The journalist who sent the Twitter message indicating that the president was in the audience, Taha Bouhafs, has since been arrested and is being questioned by police. He is suspected of having been part of a group which planned to cause violence and damage to property.

The strike against government plans to reform retirement pensions entered its 45th day on Saturday.

With public transport in the capital showing signs of a return to normal on Thursday and Friday, there were a number of protests by small groups, including a blockade by strikers which temporarily closed the Louvre museum in Paris, and the invasion of the premises housing the offices of the moderate CFDT trade union.

Widespread condemnation of protest action
Junior ecology minister, Emmanuelle Wargon, has been among those to condemn Friday's protests, saying they show "the collapse of the social fabric".

Speaking on French radio on Saturday morning, Wargon said "You don't have to agree...that's understandable. But you have to show some respect, at least for the basis of our democratic society. Otherwise, what have we got? A rebellion?

"And if you overthrow this government, how will you name a new one? Who is going to decide who rules?" the junior minister asked.

Far-right leader Marine Le Pen has also condemned Friday night's attempt to disrupt a theatre performance. But the National Rally president went on to blame the government for the "social tension" which, according to Le Pen, has been building for the past 18 months.