Akufo Addo, There Is No Good Leader That Will Abandon Projects By A Former Government 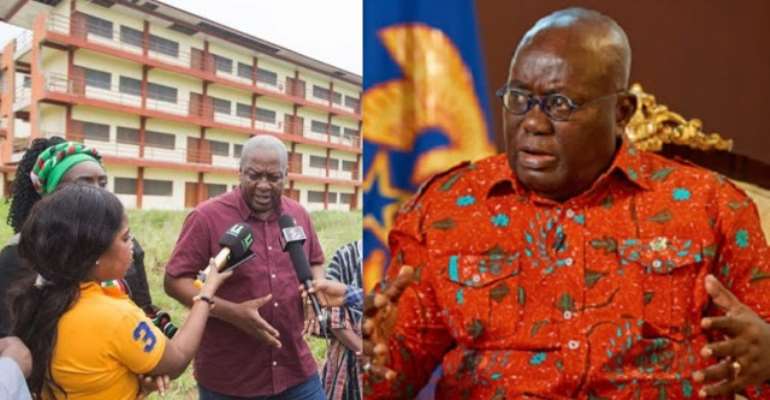 If you want to know why African politics is branded corrupt and never given a meaningful recognition by any developed country, then you don’t need to look far, just take the current daily affairs under the NPP government in Ghana, as an example.

This article will reveal how Akufo Addo’s administration has made Ghana lost millions of dollars and caused thousands of Ghanaians to suffer for nothing because of greed, corruption, self-recognition and foolish pride.

As a matter of fact, Akufo Addo has no chance to win any presidential election for the second time in any serious country in the world, unless Ghana or Africa because of his selfish political acts which have to lead to a huge financial loss to the nation.

In 2016, NDC was defeated by the NPP party under the current leader, Nana Akufo Addo. Before leaving office, the ex-Ghanaian leader, John Mahama left many projects uncompleted. Some of the abandoned projects include:

These projects, for God's sake, are the property of Ghana or for Ghanaians, toward economic and political developments in the country. Therefore, it doesn't make sense for a new political party in power to abandon such projects.

In my life, I have never seen any Ghanaian leader with such an outrageous selfish character in the political history of Ghana, like Nana Akufo Addo.

From the time he came to office, apart from the controversial Cathedral project, in the time many Ghanaians have lost their jobs, amidst the collapsed of financial institutions, were enough to warn Ghanaians that this man lacks the qualities of good leadership.

Nepotism, and tribalism, have forcefully become part of Ghana's constitution under Nana Akufo Addo’s administration. Instead, a section of Ghanaians put all the blame on Mahama, as the one responsible for the political and economic woes, without taking the inefficiency of this lazy man with over 123 ministers into consideration.

John Mahama is not a saint, like many African leaders, he was also involved in corruptible scandals but this man is more experienced and intelligent than Akufo Addo as a leader by far. This is something many Ghanaians have failed to realize because of hate. They can't simply accept because of hate for Mahama.

It seems those who live in Africa or Ghana see everything that glitters is gold but those living in the developed world see the dangerous, immaturity, and inefficiency paths of Ghanaian politics.

Akufo Addo would have been one of the most respected leaders not only in Africa but on an international level if he had put aside his demons of jealousy, hate, corruption and have continued with the abandoned projects of the former Ghanaian government.

After all, the projects are for the comfort of Ghanaians, not for the NDC. Because of Akufo Addo's selfishness and pride, he declined to continue the projects hoping Ghanaians will recognize him as a better leader than Mahama.

What has transpired in Ghana wouldn't have happened in any developed country or done by any intelligent African leader. We mustn't be angry with Donald Trump to call Africa 'Shit-hole Nations.'

Akufo Addo from every angle is a total failure. Intelligent Ghanaians must ask him if NDC doesn't come to power again, will the abandoned projects become a wilderness? What a waste of precious national resources?

Finally, Ghanaians must fasten their seat-belts very well to pass through another painful chapter of "The Agony Of Ghanaian Politics Under Nana Akufo Addo."