One Day Forum On HIV And Human Rights Held 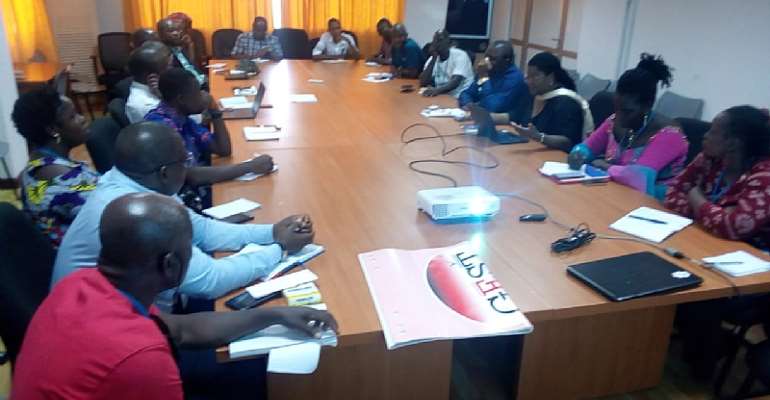 The National AIDS Commission in collaboration with UNAIDS and OHCHR hosted a one-day consultative forum on HIV and Human Rights.

Stakeholders made recommendations for the development of the National Strategic Plan ll on HIV/AIDS for Liberia which will inform the new Global Fund Grant application for 2020.

The USAID Fast Track targets on repealing of Laws and policies that discriminate those most affected by HIV are clear yet we are far from attaining them.

The strategic plan is a five-year plan that will run from (2021-2025) with a key focus on preventing new HIV infections in order to maintain a low HIV prevalence in the next five years.

According to the organizers, the five years plan when finalized will reduce new HIV infections by 75% by 2025; intensify the provision of quality and accessible HIV prevention information and services for key populations; and also accelerate actions to eliminate mother-to-child transmission of HIV including placing positive mothers on lifelong antiretroviral therapy.

It can be recalled that in 2015 the National AIDS Commission and Partners launched a five-year plan that was structured on nine pillars.

The 2015 plan which ends 2020 December was basically focused on reduction of new HIV infections by 50% and improving the survival rate of adults and children on ART from 74% in 2014 to 85% in 2020; Preventing new HIV infections (Non-Clinical): describes the targets of behavioral change interventions within the general population and young people15-24 years; Preventing new HIV infections (Clinical): articulates interventions around the clinical response, with emphasis on HIV testing and counseling, which is the entry point for accessing all other HIV and AIDS services, Blood Safety, Post-Exposure Prophylaxis, and Management of Sexually Transmitted Infections (STIs).

The 2015 plan also has a role map in Preventing HIV in Key Populations: deals with providing HIV prevention information and services for Key Populations (Women and girls, FSWs, MSM, and PWIDs); Condom Promotion and Distribution: stresses national condom needs for the sexual reproductive health program within the general population including young people as well as condom-compatible lubricants as part of the HIV and AIDS programs; Treatment, Care, and Support for PLHIV: key components include

treatment for HIV positive pregnant women (WHO Option B+), care of people living with HIV, Antiretroviral Treatment (ART), and management of TB-HIV co-infection.

In 2013, the Liberia Demographic Health Survey (LDHS) reported that Liberia National HIV prevalence was 2.1%, 2.4% of women and 1.8% men, but significant geographic variations exist between urban and rural areas, between regions, and between counties. HIV prevalence in urban areas (Female-2.7% and Male-2.5%) is almost three times that in the rural areas (Female-1.0% and Male-0.7%). Greater Monrovia, where about 30% (1.2 million of 4.1million) of the population of Liberia lives, bears the greater burden of the epidemic (Female-3.0% and Male-3.4%) than any area in the country.

It is noteworthy that the 2013 Integrated Bio-Behavioral Surveillance Survey (IBBSS) found high HIV prevalence in men only or predominately men key population sub-groups: 19.8% in MSM; 5% in People Who Inject Drugs (PWIDs), a predominantly male behavior; and 4.8% in transport workers (long-distance bus and truck drivers), a heavily male-dominated workforce.

Already the UNAIDS has set up an ambitious 2030 goal to end the epidemic. The United Nation’s program on HIV/AIDS (UNAIDS) set up a 90-90-90 Targets. According to UNAIDS, the fast-tracking approach on ending the AIDS epidemic by 2030” or “90-90-90” goal is aimed to make sure 90 percent of all people living with HIV know their status, 90 percent of them have begun antiretroviral treatment, and 90 percent of those on treatment have a suppressed viral load by 2020.

Liberia is beginning to experience progress in the 90-90-90 targets. In 2018, 93% of pregnant women living with HIV received antiretroviral medication to reduce the risk of mother-to-child transmission of HIV and Liberia remains one of the few countries in the region that has successfully scaled up PMTCT coverage to over 90%.

The National AIDS Commission statistics is quoted as saying out of the 39,144 that are estimated to be living with the disease in Liberia, only 13,144 persons were identified and tested thereby (representing 66%) under the first 90, and 12,120 persons living with HIV have been placed on treatment (representing 53%) under the second 90 and 6,593 (representing 52%) have their viral load suppressed under the third 90. Each year, an estimated, 1,900 people get infected with the HIV virus.

The one-day stakeholders' meeting which was held on Thursday, December 12, 2019 at the UN one house in Monrovia brought together stakeholders from LIPNET, CSOs, FBOs amongst others.

In brief remarks, the National AIDS Commission of Liberia Chairperson Commissioner Theodosia Slewion-Kolee told participants that in order to achieve the ambitious five years plan it requires the collective and coordinated approach of all implementing partners and said working can only succeed if key emphasis is placed at the granular level of society.