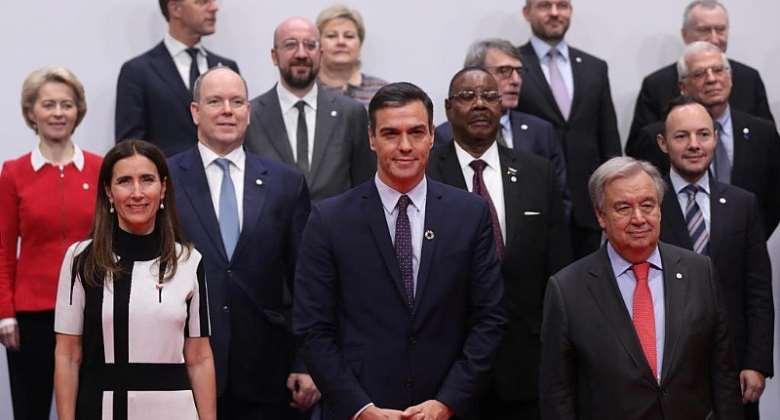 Global climate talks kicked off Monday in Spain amid a stark warning from UN chief Antonio Guterres that humanity faced a choice between hope or surrender. For NGOs, rich nations are failing to foot the bill for the impact of climate change on developing nations.

"The world must choose between hope and surrender," Guterres told the opening plenary of the UN Climate Change Conference, known as COP25, which kicked off Monday in the Spanish capital Madrid.

Some 25,000 delegates from almost 200 countries will meet for the next two weeks to try to put the finishing touches on the rules governing the 2015 Paris climate accord.

Political will, or lack of, will be key.

"Do we really want to be remembered as the generation that buried its head in the sand that fiddled while the planet burned?" Guterres insisted, warning that unless real commitments are made, global warming could reach a "point of no return."

The warning comes days after the European Union declared a "climate emergency", echoing a joint, equally grim crisis warning issued in early November by more than 11,000 scientists from 150 countries.

The stakes are high, and many in the NGO community are expecting COP25 to deliver.

"This COP25 is not just a technical COP like some people say," comments Fanny Petitbon, a climate expert with the NGO Care France.

"It is actually a stepping stone and must be a wake-up call to countries who seem to have forgotten the commitments they made four years ago in Paris," she told RFI by phone from Madrid.

Paris deal in crisis
The Paris agreement "is in crisis" Petitbon said, notably due to Donald Trump's decision to pull the US out of the deal.

On Monday, US Congressional leader Nancy Pelosi insisted "we're still in it", as she led a 15-strong delegation to the climate conference to insist that large swathes of the United States were still committed to the 2015 Paris deal.

The 196-nation treaty calls for capping global warming to well below two degrees Celsius, and 1.5C if possible.

However, keeping to that guardrail will require countries to increase their emission reduction targets by five-fold.

Countries like Japan appear to be veering in the opposite direction.

"Japan has said that it is not ready or even considering enhancing its reduction target," says Petitbon.

Tokyo, along with France, the United States and Saudi Arabia is part of the G20 countries, rich nations whose members represent 80 percent of global greenhouse gases.

"None of these countries have announced that they will scale up their emissions reduction targets," continues Petitbon.

No commitment
In contrast, poor states, responsible for only 8 percent of global greenhouse gas emissions have stepped up their targets.

"The gap between the rich and poor is just enormous. We really need a commitment by all countries to enhance their reduction targets by 2020," she explains, warning that the next ten years will be critical if the world is to avoid what Guterres describes as a "point of no return."

One of the highly anticipated discussions of the two-week conference will focus on narrowing the gap between rich and poor nations, particularly when it comes to climate finance.

"For years now, rich countries have completely blocked discussion on how to provide financial and technical support to these [poor] countries, because they do not want to pay the check," comments Petitbon.

Time to pay
A report published last week found that the EU and the US should foot the bill for the damage caused by climate change to vulnerable countries. Island states in the Pacific and Africa are most in need of funds.

"We can no longer wait for rich countries to keep hiding their heads in the sand; they need to look at their responsibilities and support poor countries," Petitbon said.