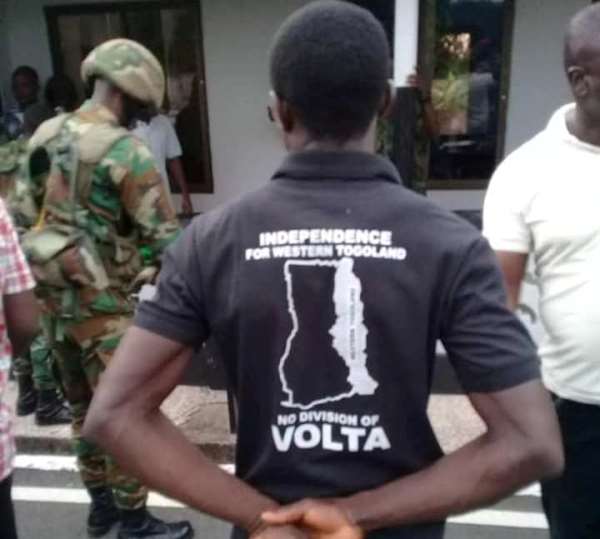 The Wa Circuit court has remanded the ten suspected members of the separatist Western-Togoland group who were arrested in Tumu last Friday.

The 10 have been charged with treason felony and remanded by the court presided over by His Worship Baar Forson Agyapong after their charges were read to them in their preferred languages.

D/Sgt. Martin K. Dagbortse, prosecuting, told the court that the group who call themselves members of “the Western Togoland movement group” on 29th November held a meeting with the paramount chief of Wa, Naa Fuseina Pelpuo lV and his sub-chiefs on the blind side of the police to seek their support in the formation of the Western-Togoland.

He said the group were not given audience and were chased out of the palace.

The matter got to the Upper West Regional Police Command who mounted surveillance on the group.

D/Sgt Martin K. Degbortse further told the court that on the 30th of November, 2019, police intelligence gathered that the group was at the Tumu Chief's palace to court support from the Sissala Chiefs.

Based on the intelligence, personnel from the Sissala East Police command proceeded to the area, got the ten arrested and transferred them to the Upper West Regional police command for further investigation.

His worship Baar Forson Agyapong, before remanding the ten suspected separatists said the court did not have the jurisdiction to go into the merits of the case but that he was remanding them to allow for the police to investigate into the mater.

The suspects are to reappear in court on December 9, 2019.

The Homeland Study Group Foundation (HSGF) led by 85-year-old Komi Kudzordzi, announced its separation on their official social media handles on Saturday, November 16, after a group meeting was held in Ho.

Five of the group’s members who were arrested last month are already facing charges of treason for their involvement in the supposed independence declaration that saw the Volta Region was now 'Western Togoland.'

Background
About  81 members  of the separatist group were in May 2019 arrested for assembling for a protest over the arrest of seven leaders of the Homeland Study Group Foundation.

Also, the Attorney General in July 2019  withdrew all charges  brought against the members of Homeland Study Group Foundation who were working for the secession of the Volta Region from Ghana.

Appearing before the court presided over by three judges, Winnifred Sarpong, a senior State Attorney told the court that they have been instructed to withdraw the case against the nine.

The accused persons were facing charges of treason, abetment of unlawful assembly and offensive conduct conducive to the breach of peace.