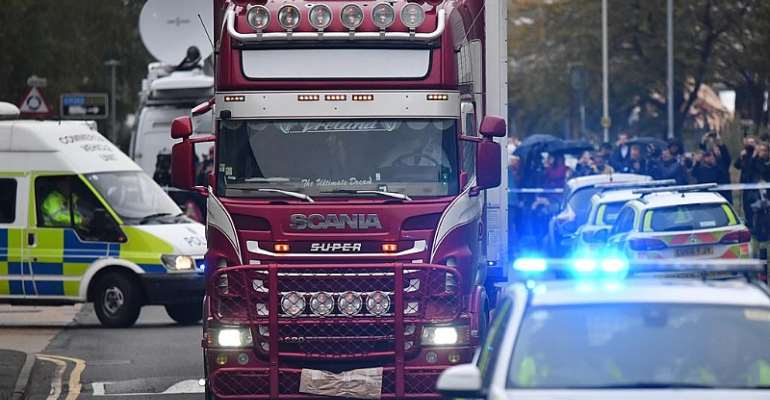 Police in the UK have arrested four people so far in connection with the deaths of 39 Asians apparently smuggled into Essex in a refrigerated container-lorry. The victims are reportedly Chinese and possibly Vietnamese. Police say 31 male and eight female corpses were found.

British police on Friday announced three new arrests in connection with their investigation into the deaths of the 39-would-be illegal migrants.

A man and woman were arrested in Warrington, Cheshire in north-west England.

A man from Northern Ireland was arrested at Stansted International Airport in Essex, in the south of England, about 60 kilometres from Grays where the bodies were discovered on Wednesday night.

They are charged with human trafficking and murder.

The lorry drive who was swiftly named as Mo Robinson from Portadown in Armagh, Northern Ireland, remained in custody on Friday, on suspicion of murder.

Rented vehicle
Dublin-based Global Trailer Rentals confirmed that it owned the refrigerated trailer which contained the bodies. GTR said the container had been rented out on 15 October 2019 for 275 euros per week.

The company said the trailer was equipped with a GPS tracker whose data was to be handed over the enquiry. Investigators may be able to determine where the victims were loaded and if other journeys had been made earlier.

According to Bulgarian authorities, the truck was registered in Bulgaria in 2017 but had left the country and never returned.

What is known so far about travel data

As well as Essex Police and the UK National Crime Agency, the Federal Court in Belgium has launched an enquiry.

The UKNCA has said that the number of migrants entering the UK illegally in containers and trucks has increased in recent years. The agency says the would-be migrants are at greater risk also.

Initially police believed all the victims to be Chinese nationals. However, two families from Vietnam have alerted the authorities fearing one child from each family may have been among the dead.