'We can't afford to play politics with everything' - Akufo-Addo 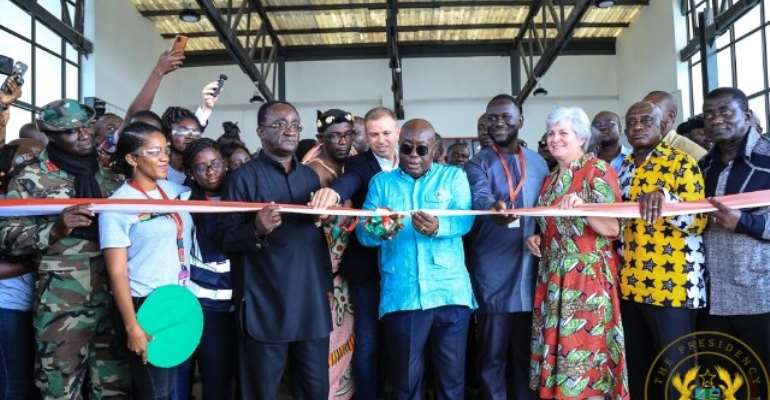 President Addo Dankwa Akufo-Addo has called for an end of what he calls over-politicisation of every policy in Ghana.

Commissioning the second medical drone distribution centre in Mpanya, in Asante Mampong, in the Ashanti Region, the President said the incessant politicisation of all issues does no credit to Ghana’s politics.

“When Zipline is called to supply blood products during emergency situations, it does not ask if the recipient is an NPP or NDC member before doing so. Health, like many other aspects of our national life, knows no party colours,” he said.

At the commissioning ceremony on Thursday, October 10, 2019, as part of the second day of his three-day tour of the Ashanti Region, President Akufo-Addo stated that the second distribution centre is part of Government’s broader commitment to expanding the reach of the medical drone delivery service, and ensuring that no Ghanaian is left behind in access to essential medicines.

Since the commencement of the operations of the first medical drone distribution centre in Omenako, in the Eastern Region, over 1,000 flights have been made, with over five thousand (5,000) products delivered.

This, according to the President, is an impressive start, adding that “we hope that when all the over two thousand (2,000) health facilities in the country are brought onboard, we will have many more deliveries per day, serving the entire population.”

Describing the medical drone service as being of great help in managing medical cases at the various facilities, he recounted the case of one Charles Coffie, a 44-year-old driver in the Eastern Region, whose life, was saved by the supply of emergency blood products after he suffered severe bleeding during an operation.

“We have also heard very positive stories from health practitioners of the various health facilities benefiting from this project. These testimonies point to one thing – we cannot afford to play politics with everything in this country,” he said.

President Akufo-Addo stated that, over the past two and a half years, his Government has invested heavily in the healthcare delivery system of the country.

With the dearth of ambulances weakening considerably the efficiency of the country’s healthcare system, he indicated that his Government, upon assuming office, stated that it was going to procure one ambulance each for the two hundred and seventy-five (275) constituencies in Ghana.

“The naysayers said this was not possible. However, we have taken stock of the first batch of ninety-six ambulances, and, by the end of December, the rest will be in. We have already trained the drivers for these ambulances to respond to the health delivery needs of our people,” President Akufo-Addo said.

He recounted, again, statements made at the introduction of the medical drone delivery service for the delivery of essential medical health products.

“Our political opponents went as far as making unfortunate statements such as ‘the drones will be used to take pictures of women bathing in the villages’. Today, we can all see how impactful this service has been, just within the past five months of its operations,” he said

With Zipline commencing the construction if the third drone delivery site, the President urged the company to make the remaining sites operational as soon as possible so that many more health facilities benefit from this service.

For the avoidance of doubt, President Akufo-Addo reiterated that “Government is not buying the drones, neither are we paying for the infrastructure costs of the project. As per our contract with Zipline, they procure all the drones required, build the infrastructure, and Government pays for the cost of delivery of the medical products from the support Government receives from Corporate Ghana.”