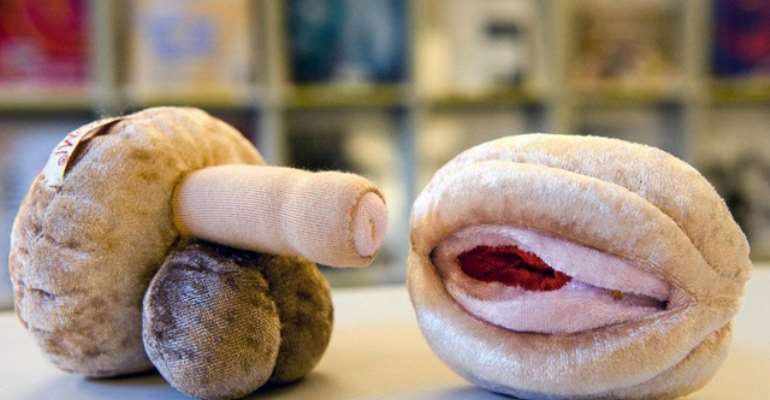 Genitals made of wood and soft materials were used for a while in Basel schools for sex education classes – photo credit: swissinfo.ch

President Akufo Addo, once again, is facing confrontation, this time not disapproval over a Cathedral project or adding the French language to the Ghana Education Service curriculum but his decision to introduce Comprehensive Sexuality Education in public schools.

What is sexual education which has sparked arguments and hostility in the country, leading to a threat by the Ghana Pentecostal and Charismatic Churches that: if Comprehensive Sexuality Education is not entirely withdrawn, the NPP will see its ultimate defeat in the forthcoming elections?

Sexual education refers to the provision of scientific, biological and physiological information to a child about the structure of the human body, differences between representatives of different sexes and norms of human behavior during natural sexual manifestations.

In recent months, the World Health Organization has published a report on the impact of sex education on unwanted pregnancies, sexually transmitted diseases, episodes of sexual abuse and discrimination based on sexual orientation.

Since social conventions and gender discrimination have a great influence on the expression of sexuality and sexual behavior, they argue that a good quality of sex education can have a positive impact on attitudes and shared values.

In the United States and many European countries, sexuality education classes have been around for decades and according to governments that want sex education to be taught at school, the subject is important because it concerns the whole person and holds together the physical, cognitive, emotional, social and interactive aspects of sexuality.

It does not encourage children and young people to have sex, but supports their sexual development and gives them the tools to learn the principles of human reproduction and to explore emotions and feelings, interpersonal and family relationships.

Children need and deserve guidance, not only information. Whatever we tell children, we also teach them. And what we teach them will shape their personalities, attitudes, and values throughout their entire lives.

The term “Comprehensive Sexuality Education” (CSE) encompasses most sex education for school-aged children that emphasizes risk-reduction techniques as opposed to character-based education that provides children with skills and tools to avoid risks altogether.

Comprehensive Sexuality Education, sometimes called Comprehensive Education on Human Sexuality has entered classrooms all over the world. A modern form of sex- education, has no age limit, starting from pre-school and accompanying children all the way through high school and into adulthood.

Comprehensive Sexuality Education usually implies an approach to human sexuality far from what the majority of parents deem fit for their children. Curricula professing to represent a CSE approach is replete with controversial topics, including teaching very young children about sexual pleasure, sexual orientation, gender identity, and access to and use of contraceptives, abortion, and other drugs and medical procedures that carry their own health risks.

·Comprehensive Sexuality Education is also likely to jeopardize their health and wellbeing. While CSE is frequently invoked as a way to prevent teenage pregnancies, the transmission of sexually transmitted diseases (STDs – also referred to as sexually transmitted infections—STIs), and even violence against women and girls, CSE may, in fact, undermine its professed goals.

·United Nations Member States are not bound to accept or legitimize CSE in UN resolutions and programming; nor are they obliged to implement CSE curricula at the national level. In fact, based on the evidence below, they should reject both the terms and the ideology behind CSE to protect the best interests of the child.