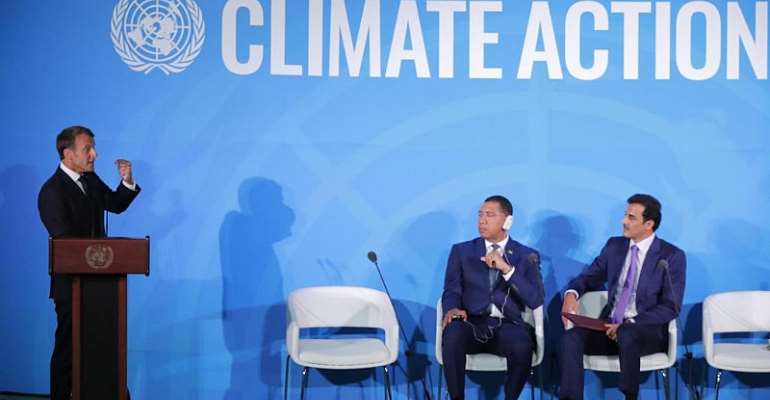 French President Emmanuel Macron on Monday called on his counterparts to include climate change in their trade and finance policies.

Speaking in New York at a UN climate summit aimed at rebooting the 2015 Paris Agreement against global warming, Macron said countries should not import goods that increase carbon pollution nor fund polluting plants in other countries.

He also asked other nations to increase their pledges to the Green Climate Fund, which helps poorer nation with climate issues.

"We are now at $7 billion," Macron said. "The target is $10 billion to make for the United States withdrawal."

Before addressing the summit, Macron invited his counterparts from Chile, Colombia and Bolivia to a meeting where 455 million euros in extra funds were pledged by the World Bank, Inter-American Development Bank and the non-profit Conservation International to protect the world's rainforests.

Warning
Opening the summit, UN Secretary-General Antonio Guterres said: "The climate emergency is a race we are losing but it is a race we can win."

During a day of addresses from more than 50 leaders from around the world, the unscheduled arrival of the US president Donald Trump drew attention away from the speakers.

The American leader, who has repeatedly expressed doubt about the scientific consensus on man-made causes of global warming, left after a few minutes.

His lightning visit was later upstaged by the announcement that Russia would formally accept the 2015 Paris Agreement.

Adoption
The decision signified Russia's consent to the obligations under the Paris Agreement, the government said in a statement.

"It will now allocate financial resources ... to developing countries for prevention of and adaptation to climate change."

Presenting his decree at a government meeting, prime minister Dmitry Medvedev said: "The threat of climate change is (the) destruction of the ecological balance, increased risks for successful development of key industries ... and most importantly, threat to safety of people living on permafrost and increase of natural disasters."

Greenpeace Russia welcomed the decision to accept the Paris Agreement. "Russia's actions have great significance: our country has a huge potential to cut down on greenhouse gas emissions," the environmental organisation said in a statement.