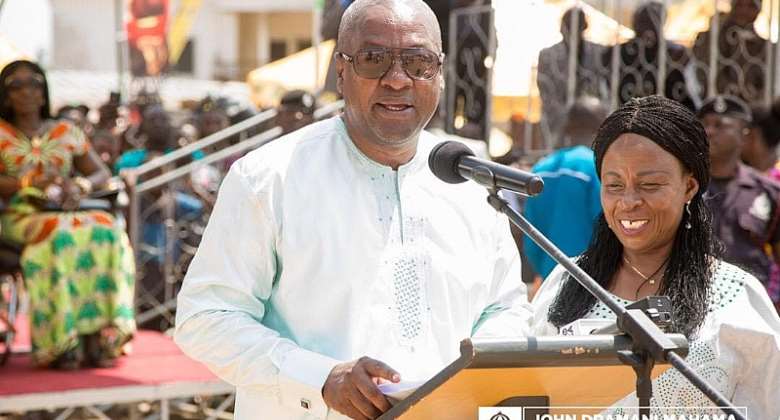 A former Chief of Staff has denied claims that former President John Dramani Mahama, was persuaded by Manhyia Palace to accept defeat in the 2016 elections.

According to Mr. Julius Debrah, this claim is not supported by the facts.

“I state without equivocation that the decision to concede and congratulate Nana Akufo-Addo even before the official results were declared was taken by President Mahama himself without any persuasion from any quarter,” the statement said in part.

Otumfuo Osei Tutu II made the revelation when he delivered a speech at the UN General Assembly on using traditional methods and culture to engender peace in the Ashanti Region and Ghana.

Mr. Debrah maintains this cannot be true even though “the Asantehene has over the years been a very respected interlocutor in Ghana's multi-party political engagements.”

Reference is made to a video recording of an address by His Majesty the Asantehene, Otumfuo Osei Tutu II, at the UN High Level Forum on the Culture of Peace, which seems to suggest that former Ghanaian President John Dramani Mahama had to be persuaded to concede defeat in the 2016 Presidential Election.

As former Chief of Staff to President Mahama, I was associated closely with all the pre, during and post 2016 poll events. I state without equivocation that the decision to concede and congratulate Nana Akufo-Addo even before the official results were declared was taken by President Mahama himself without any persuasion from any quarter.

The Asantehene has over the years been a very respected interlocutor in Ghana's multi-party political engagements. He has been generous in his wise counsel to present and former Presidents.

It is public knowledge that President Mahama willingly announced his decision to accept the outcome of the 2016 elections and congratulate Nana Akufo-Addo even before the official results were formally declared by the Chairperson of the Electoral Commission.

On the day President Mahama willingly conceded defeat, he met with then Vice President Kwesi Bekoe Amissah- Arthur, NDC Chairman Kofi Portuphy, General Secretary of the NDC Johnson Asiedu Nketia, together with some high ranking members of the party and informed them of his decision to call and congratulate Nana Akufo-Addo.

As Otumfuo himself has already stated publicly, under his auspices, there were three meetings held in Kumasi between President Mahama and then Candidate/President-Elect Nana Akufo-Addo during the period.

The first was prior to the December 07 election in which the two candidates promised to play fair and respect the will of the people. Indeed, President Mahama in a conversation with Nana Akufo-Addo said he hoped Nana was not going to tie down the nation in a court case again after the 2016 elections.

The other two meetings took place after the official declaration of the results of the elections, and to re-emphasise, after President Mahama had publicly conceded and congratulated Nana Akufo-Addo.

Those two meetings focused on matters arising out of the transition process.

President Mahama made a commitment to the people of Ghana, never to be the one to subject them to the periods of unease, political instability and the doubts they experienced after the 2008 and 2012 elections. He remained true to that commitment and exemplified it after the 2016 elections.