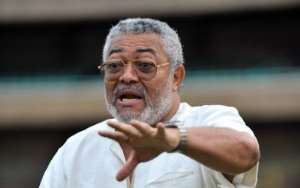 The call follows the recent revelation that the Manhyia Palace persuaded the losing candidate in the 2016 presidential election to accept defeat.

In a post on Twitter Tuesday morning, Mr Rawlings stated: "The Asantehene has made us proud with a highly educative address to the UN on the subject of Peace."

"Its unwarranted and unnecessary. There's enough tension. Let's cool it and cool off," Mr Rawlings tweeted.