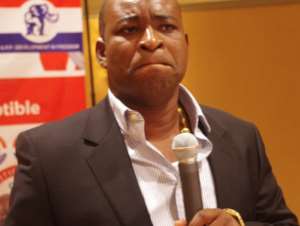 He has, therefore, called on the authorities at Manhyia – the seat of Asanteman – to take drastic action by banning the former President from setting foot in Kumasi. The NPP Ashanti Regional Chairman said on Kumasi-based Hello FM yesterday.

Besides, he called for a similar ban to be placed on the former Chief of Staff, Julius Debrah, whom he said showed gross disrespect to the Golden Stool, the seat of Otumfuo.

Wontumi's call for a ban on Mr. Mahama and Julius Debrah comes barely few days after the NDC bigwigs debunked a statement by the Asantehene that suggested that Mr. Mahama was not willing to concede defeat after losing the 2016 general election.

Wontumi, who clearly felt agitated over Mr. Debrah's statement, said his comments were unfortunate and regrettable and should be condemned.

“I am humbly appealing to the chiefs of Asanteman to impose a ban on Mr. Mahama and Julius Debrah from stepping their feet in Asanteman, especially in Kumasi,” he said angrily.

Wontumi stated that Otumfuo held a secret meeting with Nana Akufo-Addo and Mr. Mahama at the Manhyia Palace on the eve of the 2016 elections and another one after the elections, adding that the agenda of the meetings was about the polls.

According to him, Otumfuo was right by pointing out that he (Otumfuo) persuaded Mahama to accept the results of the 2016 presidential elections, saying that Otumfuo saved Ghana from disaster and the NDC cannot twist the facts of the case.

He said Otumfuo had been instrumental in protecting the peace and tranquility being enjoyed in Ghana and the NDC elements cannot just undermine the efforts of the King.