Why Some Ghanaian ‘Journalists’ Yearn For Mahama’s Return 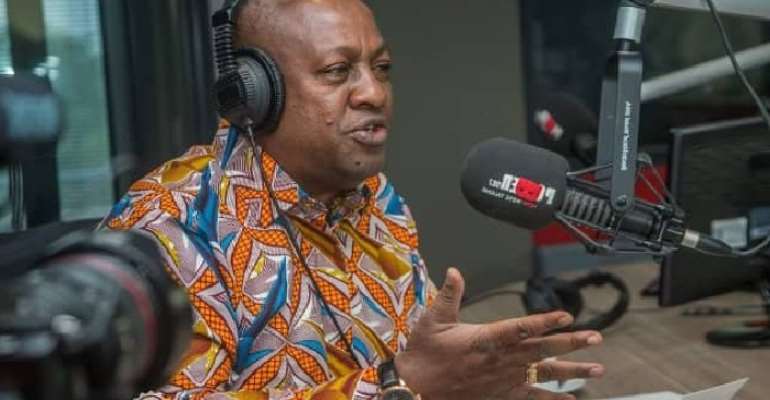 Let us just keep this conversation simple, away from any fancy semantics and stick to the realities on the ground today under Nana Akufo-Addo's administration. Regardless of which party is in power, all journalists, reporters, TV/radio presenters, or simply those in the media family must always remember that their chosen profession is one of the noblest and most consequential in a civilized society that sincerely believes in the sovereignty of its citizens.

The media's behavior in every community is most consequential in the sense that in many cases whatever they put in the public space, whether in the print, electronic or in digital format, can change the course of history today or in the not-too-distant future. It is why countries around the world-past and present, that do not regard their people as citizens but mere subjects with very, very limited civil rights and liberties, have mortal hatred for free speech or press freedom. One doesn't have to provide specific examples here concerning countries that suppress free speech, imprison, or mistreat their nationals with dissenting views.

On top of that, are the vibrant media; vociferous opposition parties; critical civil organisations; non-governmental bodies with enough leverage to operate anywhere in Ghana; and more significantly, an independent judiciary. These are the facts or the current state of affairs in Ghana, as we speak. All the latter-days' whiners, complainants or subtle accusers, claiming that this country is descending into media suppression under Nana Addo's government are merely over-dramatizing events which do not reflect realities.

Regarding Nana Akufo-Addo's “troubles” vis-à-vis some of the people within the media, accusing his ruling NPP regime of showing “unprecedented hostilities” toward “journalists” in Ghana, the straight up answer is that this “Kyebi tough dude” at the Jubilee House is not intimidated by the threat of blackmail. Unlike his predecessor, ex-President John Mahama, Nana Akufo-Addo has proven to be a leader who will not give in to threats of exposure of any wrongdoing or provide V8 truck/money to any media personnel just to suppress potential damaging information.

This present writer may not be able to provide evidence right now, yet it is an open secret during the NDC government under Mr. Mahama that considerable number of Ghanaians, including the so-called celebrities and some media folks, were handed out state-owned V8 trucks and other vehicles for their personal use and subsequent ownership. Surely, the practice of using the state's meager resources for the benefit of the NDC's party cronies and other hangers-on endeared former President Mahama to many “journalists” or media people at the time. So, you wonder why some of these self-promoters wish Mr. J.D. Mahama was back as president, not for his competence but for his “father Christmas generosity” using the taxpayers' money.

Since the NPP's “old man” will not do what his immediate forerunner did while in power, it's not surprising to many of us that Nana Akufo-Addo has now become the legendary hen that the Akans philosophically describe in their folklore, that no matter how beautifully that hen dances in the full glare of the cunning hawk, those choreographic moves will never please that diurnal predator, ever! This is because the hawk depends on a prey such as the hen for survival almost the same way some journalists/media practitioners in Ghana today have become “blackmailers or hustlers” hustling their ways through the corridors of power to support their newly-acquired Western lifestyles. They all want to have vehicles and eat at high-end restaurants (nothing wrong with that) but their net income can't support that lifestyles. So, what do they do?

It really is disconcerting that because of self-obsession, sectarian interests and a false sense of inability to be wrong, some Ghanaians who have 24/7 access to various forms of media platforms are cynically engaging in petty journalism such as President Akufo-Addo's not-too-friendly handshake with ex-President Mahama. In other words, who is more “gentleman” between Nana Akufo-Addo and Mr. John D. Mahama? What kind of journalism or media practice dabbles in this style of trivial comparison?

Rather than focusing on the far-reaching socioeconomic policies and programs engineered by the present government to help lessen the hardships on the average Ghanaians as a result of years of JDM-led NDC mismanagement, we have some “ace journalists” who apparently have limited apprehension of the concept of free press or the proper role of the media in democratic governance. Again, free press doesn't mean the information or months of investigations a journalist conducted or put out there cannot be questioned or challenged.

Just like all humane governments must not interfere in the work of journalists that does not threaten the security of their nations, it's also unethical for any media personnel to cry foul because his or her work has been subject to scrutiny by the public, including the government of the day. Maybe the previous administration under Mr. Mahama wasn't interested in challenging some of the information dug out by the press in that they were knee-deep in corruption and to that end they were willing to yield to media blackmail. In Nana Addo's presidency, however, it is an entirely different ballgame. Hence, a section of the media is doing everything possible to block the citizen-centered message from the government to reach the ordinary Ghanaians struggling everyday to make a living yet praising the high heavens that at least their kids can go to SHS free of charge.

Certainly, there are some journalists nowadays who really see President Akufo-Addo, albeit wrongly, as an arrogant bully in the new neighbourhood, “slapping” the faces of the press at will and the same time warning them they risk torture should they complain of any pain. Owing to some of these misconceptions manufactured by some media operatives whose alter egos have been badly jolted, they are yearning to see the NDC's “Incompetent One” back to power so they can have their self-serving ways in the name of press freedom. Ghana has a long way to go!

Bernard Asubonteng is a US-based writer and Ph.D. candidate for public/foreign policy.