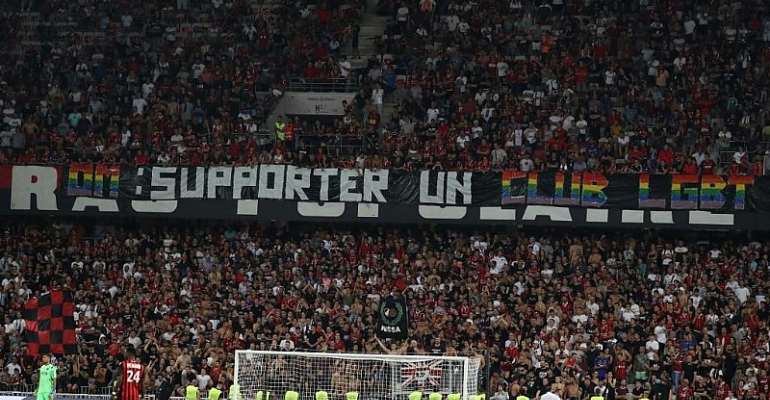 Play was suspended during Wednesday's Ligue 1 fixture, which saw Nice win 2-1 over visitors Marseille, after homophobic chants from supporters. It's the fourth time in under two weeks that a French league match has been interrupted for similar reasons.

Previously, a French professional football match had never been suspended for offensive language.

Ligue 1 officials announced this summer that they would enforce stricter sanctions on offensive language and behaviour in the stadiums, which drew angry reaction from various hardcore supporter groups.

During Wednesday's match, Nice supporters at the Allianz Riviera stadium chanted homophobic insults at the Marseille supporters, and hurled abuse at Ligue 1 officials.

Two warnings were issued over the PA system to refrain from using offensive language. Referee Clément Turpin suspended the game when fans refused to comply, sending players back to the change rooms.

It took ten minutes for the chanting to stop and the game to resume.

Marseille supporters had the last laugh as their team won 2-1.

“We can't stop every match each time some idiot does something, otherwise we will never play,” he told French TV.

Marlene Schiappa, France's minister for equality, congratulated the referee on Twitter on his “respect of football” while denouncing the banners which she said “sullied the stands”.

Schiappa, herself a supporter of Marseille, has previously addressed the issue, saying she would leave the stadium if there were homophobic chants.

Enforcing new regulations
The judicial bodies of the French professional football league has made it clear they will continue interrupting games when supporters use offensive slurs. They were gathered in Paris on Wednesday to hear 18 cases of homophobic songs or banners.

A spokesperson from the French National Association of Supporters (ANS) told RFI the new measures “aren't about fighting homophobia, but against a form of expression”.

He denounced a “repression that no one understands”.

"The chants are not homophobic," he explained. "Supporters don't care about sexual orientation."

On 16 August, for the first time ever, a League 2 game was interrupted when Nancy supporters sang homophobic chants, insulting the visiting side Le Mans.

Officials on Wednesday announced that the club will be sanctioned for “discriminatory” chants, with Nancy's stadium to remain closed to the public during three home fixtures.