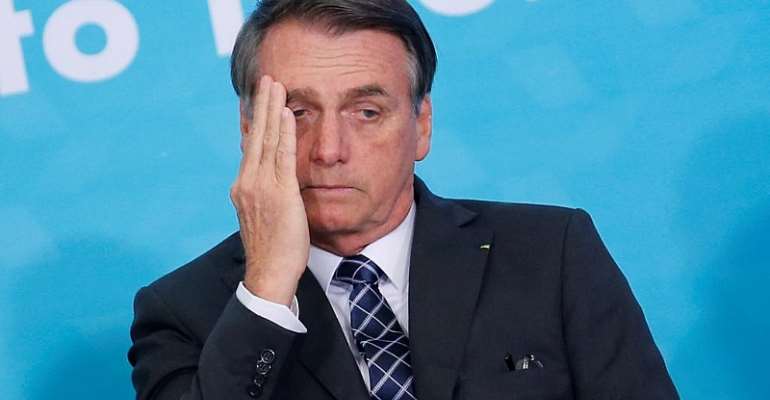 Brazilian President Jair Bolsonaro has insulted the wife of French President Emmanuel Macron on Facebook after France put pressure on Brazil for its handling of forest fires in the Amazon.

In a comment to a video Bolsonaro posted on his Facebook page of aircraft fighting widespread fires in the Amazon jungle, a follower of the Brazilian president posted photographs of the two presidents with their respective wives.

“You understand now why Macron is persecuting Bolsonaro?” reads the text beside images unfavourably comparing Brigitte Macron, 66, to Michelle Bolsonaro, 37.

To the follower's suggestion that the feud was due to “jealously on the part of Macron”, Bolsonaro replied “don't humiliate the guy. LOL”.

Asked by AFP whether Bolsonaro himself was responsible for the post, a spokesperson of the Brazilian presidential office replied “we have no comment to make”

On the sidelines of the G7 summit in Biarritz on Monday, host Macron denounced the “extremely disrespectful words” of the Brazilian president towards his wife.

“I have much affection and respect for the Brazilian people, and I hope that very quickly they will have a president who behaves like one,” the French president said.

“I didn't believe it's real,” Greenwald tweeted. “But yes, the President of the world's fifth most-populous country, in the middle of the worst crisis of his presidency, is reading through his Facebook comment section and joining in with random followers to mock Macron's wife.”

Bolsonaro's entourage attacks Macron
The Amazon forest fires have pitted France and other European nations against Bolsonaro, who has made no secret of his climate scepticism and has pledged to increase exploitation of the Amazon rainforest.

Macron made the Amazon wildfires a major talking point at the G7 summit in southern France this weekend.

Paris accused Bolsonaro of lying in a pledge to fight global warming at June's G20 summit and said it would oppose the eventual approval of a free trade deal between the European Union and South American trade bloc Mercosur.

Bolsonaro called in the military to fight the fires, but also accused Macron of having a “colonialist mentality”, and members of his entourage multiplied their attacks against the French president at the weekend.

Bolsonaro's son Eduardo retweeted a video titled “Macron is an idiot”, showing images of clashes between French police and Yellow Vest protesters on Friday, calling it “a message” to the French leader.

And on Sunday, Brazilian Education Minister Abraham Weintraub wrote “Macron is not up to the debate” on the Amazon forest in a tweet that also included Nazi remarks.

“He's just an opportunistic cretin looking for the support of the French farming lobby,” the tweet read.

Bolsonaro cancels meeting for haircut
Relations between France and Brazil have deteriorated since Bolsonaro became president.

Last month, Bolsonaro cancelled a meeting in Brasilia with French Foreign Minister Jean-Yves Le Drian to get a haircut, which he broadcast live on Facebook.

The cancellation appeared to be motivated by Le Drian's meetings with Brazilian NGOs critical of Bolsonaro.

The Brazilian president has also accused non-profits of deliberately starting fires in the Amazon after their funding was cut.

Macron and his administration became involved in a similar spat with Italy's two deputy prime ministers earlier this year, with Paris briefly recalling its ambassador to Rome over a series of insults.