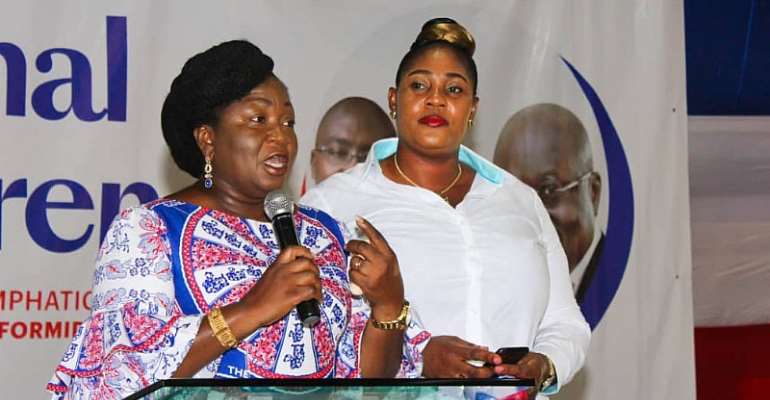 The Member of Parliament for Asokwa and Deputy Minister for Environment, Science, Technology and Innovation; Gifty Appiagyei, has pledged the support of the NPP’s Ashanti Caucus in Parliament for the pro-NPP group, Loyal Ladies.

Madam Appiagyei, who also doubles as the chairperson of the Ashanti Regional Parliamentary Caucus of the NPP, has pledged the commitment of her colleagues from the Ashanti region to the cause of the most vibrant political volunteer group in Ghana, ahead of election 2020.

She made this known at the just-ended Ashanti Regional Conference, held in Kumasi, over the weekend.

The Ashanti regional conference was the fourth in line, after the Eastern, Western and Greater Accra conferences.

Addressing the conference, Madam Appiagyei commended the ladies for having sustained momentum even after the swearing-in of the Akufo-Addo-led government. She was amazed at the amount of work the group had done to ensuring the visibility of the NPP on the ground.

According to her, this was by far, the best volunteer movement, in the annals of Ghana. She requested to be made 'mother' of the group and called for other female government appointees and Members of Parliament to adopt the loyal ladies group wholly.

Madam Appiagyei, in a remark posited that Loyal Ladies is the future of NPP, as such; the party should pay extra attention to the group.

The New Patriotic Party's Loyal Ladies is a volunteer group formed in March 2016, to groom female politicians and to canvass votes for then candidate Akufo-Addo and parliamentary candidates across the country.

The group was part of the volunteer efforts of the NPP to secure its biggest victory in Ghana's history.

Present at the conference were the Ashanti Regional Minister, Simon Osei-Mensah; the National Youth Organizer, Henry Nana Boakye, the Metropolitan Chief Executive of Kumasi, Osei Assibey- Antwi and other MMDCEs, the Regional Women Organizer, Nana Ama Ampomah, and a host of government appointees and party executives.

JHS Not Increased To Four Years Or Reduced SHS Duration – Na...
37 minutes ago

We've Been Begging To Survive Over Closure Of Our Shops – N...
37 minutes ago