African Leaders Are Trying, But Why Can’t Speak Against External Malpractices Holding Africa? 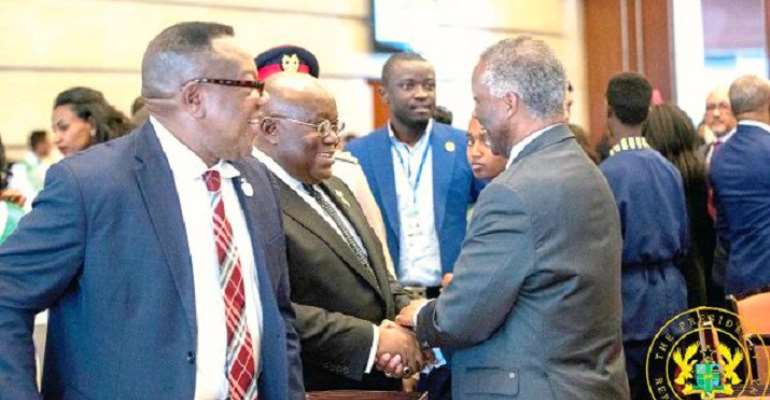 Everyone loves his or her country. The place of your origin or where your ancestors come from will live with you till the end of your life, even if you become a Jamaican, British, American, Swedish, Danish, Belgian or German citizen.

No matter how deep the African crisis is if you don’t care about it then you are a human being without a feeling or a soul. However, I do worry about one particular thing.

Since after the abolition of slavery, the fall of colonialism and Apartheid, Africa is being stalked by Western Europe (colonial masters) and the US government because their foundations may no longer have the strength they are looking for to feed their populations.

But the sad part of how to gain control of Africa’s resources is the ruthless method and policies they have implemented to enjoy what they don’t deserve, at the same time bringing unrest and suffering to the common African population.

The ModernGhana reference articles: The Four Deadly Sins Of China In Africa and Italian Writer Reveals How Foreign Multi-governments Steal Africa’s Wealth, will give you a comprehensive understanding of how foreign governments are creating infinite and chronic suffering for the common African, just for them to live in comfort, yet no African leader has reacted to these accusations, why? This is what everyone wants to know.

An Italian writer, Giampaolo Rossi Romano, who is not happy about the influx of African immigrants in Europe writes: Europe will be African, the elite wants it. He explains, “100 MILLION ARE COMING IN.

We are facing the "most impressive demographic growth in human history." Stephen Smith, a profound connoisseur of Africa, explains this in a recent interview: " in two generations there will be at least 100 million young Africans ready to come to Europe.” Source: https://bit.ly/2R64wk4

Surprisingly, some Italian writers are blaming foreign governments for the current political and economic chaos in Africa. For example, Paolo Farinella, an Italian priest, writes:

The deadly consequences mark a genocide accounting from 1998 to 2014, of which millions of people died in Coltan mining, on the altar of mobile phones, used by the West that use triangulated mediators to avoid being discovered.

As a result of the exploitation in Congo, wars are underway between hired gangs to this or the multinational or foreign state for possession of the mines. The precious mineral causes the war that is devastating the country. The proceeds of Coltan are used to pay soldiers and buy new weapons.

In 2016, due to the Coltan shortage because of the war, the Western hi-tech industry went haywire and in the West, people went mad with panic because the PlayStation2 was nowhere to be found. In 2017, in just three years, governments have increased authorizations for arms exports six-folds, with turnovers from 2 billion to more than 14 billion.

"If the Africans close their ports to Italy and entire Europe, what will happen to their reserves? It will run dry. The Congolese, Rwandan and Sudanese, etc, that escape from their countries to Europe, ironically, are rejected at the borders because they are considered as economic migrants without the right to asylum.

The West can plunder and kill them "at home" to progress at home with the African wealth, but Africans cannot enter Europe? They want the Africans to work in the mines where they die to keep the superfluous western economy alive. If this is politics, civilization, and law!

If this is Humanity! Without taking into account that Europe, with a self-styled Christian majority, creates wars, feeds them, exports poverty, misery, death, robbing the riches of Africa and pretend to choose between refugees and economic migrants?

History is a great teacher because it teaches nothing, but gives us the coordinates of how we will be overwhelmed, paper twigs because it always arrives at the appointment to balance injustices and balance accounts.

In the next century, migration will overwhelm Europe, old, dull and short-sighted for a handful of votes. The wise man does not build walls that are lethal weapons for those below but opens gates to lighten the water mass of 10 million people ready to die in order to hope. Source: https://bit.ly/2IRUmuc.

How can an Italian pastor voice out the crime against Africa, yet we have thousands of pastors across the globe, including America, who don't care about the suffering of Africans?

I have stopped writing any more articles about Aids and Ebola because the continues accusing the US government of responsibility for the two deadly diseases, supported with articles from various health writers from Japan, Germany, America, and Holland are enough.

The hypocrites in both Africa and foreign countries, can attack me and call my articles conspiracy theories, that wouldn’t change my mind and others who know the truth.

We have given them too much liberty to suffer slavery, colonial brutalities, the horrors of Apartheid, Aids, and Ebola. I think it’s enough because enough is enough.

If you don’t believe in my articles, let the references of articles from the Italian writers and that of the Dutch scientist Johan Van Dongen, German doctor, Wolff Geisler and other medical writers I have presented, be something important to remind you of your colour and always be alert because the white supremacists consider the black as inferior.